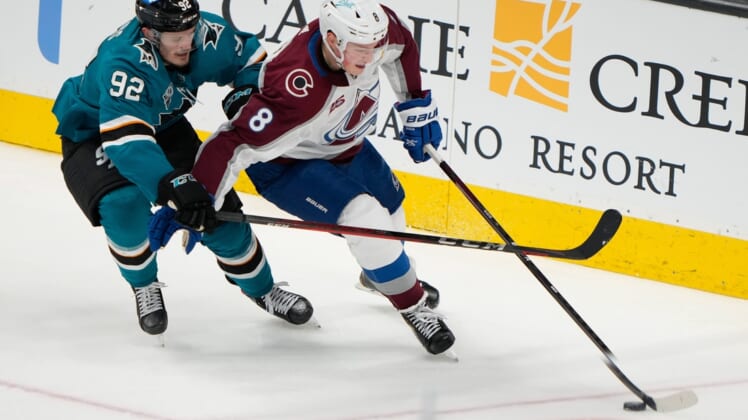 Tomas Hertl scored twice in his 500th NHL career game as the San Jose Sharks came from behind to defeat the visiting Colorado Avalanche 3-2.

The Sharks, who overcame a 2-0 second-period deficit, earned just their second win in the now-concluded, eight-game season series with the Avalanche. Colorado had won three in a row against San Jose over previous five days.

San Jose was eliminated from playoff contention earlier this week.

The game was scoreless until the 15:39 mark of the second period. Both Korenar and Grubauer had turned away more than 18 shots up to that point, and both teams were 0-for-2 on the power play.

Colorado had San Jose pinned in its own zone for long stretches of the second period, and Korenar wasn’t able to recover after stopping Patrik Nemeth’s attempt as Jost backhanded the rebound passed him to make it 1-0.

The Sharks tried to create momentum going in the other direction, but Nazem Kadri brought the puck back and set up Burakovsky’s wrist shot that put the Avalanche up 2-0 at 18:18 of the middle period.

Kane set Hertl up with a cross-ice pass and the Czech power forward beat Grubauer to cut Colorado’s lead in half with 13 seconds left in the second period.

Hertl tied the game 2-2 at 2:50 in the third frame with a backhanded shot around Grubauer’s outstretched skate.

San Jose went on the power play at 7:38 when Gabriel Landeskog was penalized for holding. Just before the man-advantage expired, Karlsson’s one-timer eluded Grubauer to put the Sharks ahead 3-2 at 9:18.

The Avalanche pulled Grubauer late in the third for an extra skater but weren’t able to net the tying goal.