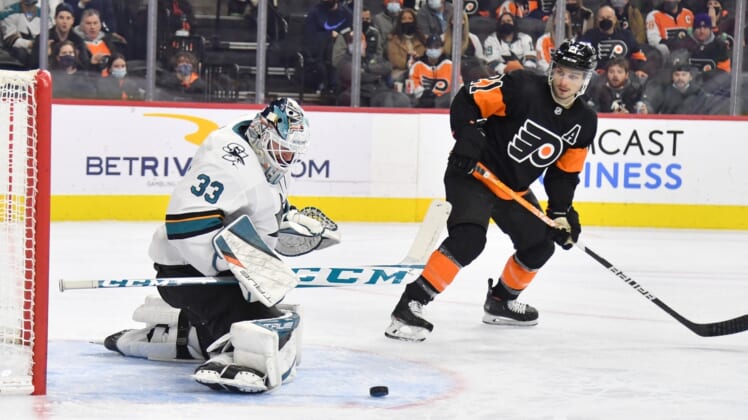 Tomas Hertl recorded a hat trick, including the game-winner 24 seconds into overtime, to lift the San Jose Sharks past the host Philadelphia Flyers 3-2 on Saturday.

Hertl now has 20 goals this season. His game-winner came on a two-on-one break, as he opted to take the shot and put it past Flyers goaltender Martin Jones.

James van Riemsdyk scored both goals for the Flyers, who dropped their fifth straight. Jones made 44 saves.

The depleted Flyers continue to compete with numerous key players such as captain Claude Giroux, Travis Sanheim, Travis Konecny and Ivan Provorov in the league’s health and safety protocol. Sean Couturier, Derick Brassard and Ryan Ellis, among others, are still out with injuries.

Both teams had several solid scoring chances, but the game remained scoreless at the end of the first period.

San Jose came out aggressive to open the second and peppered Jones with some early shots, but couldn’t capitalize. Andrew Cogliano’s redirection at 2:37 was the top opportunity.

Rasmus Ristolainen fired a slap shot at 8:12, which was kicked away by Hill. Shortly thereafter, van Riemsdyk skated in all alone and had a wrist shot denied.

The pace became quicker throughout the second, yet the game stayed scoreless.

Philadelphia went ahead 1-0 at 1:06 of the third when van Riemsdyk connected. He sped through the neutral zone and sent a nasty wrist shot past Hill. Burns and Hertl each had strong scoring chances soon after but couldn’t convert.

The Flyers then took advantage of a power play as van Riemsdyk picked up his second goal by deflecting a shot in front for a 2-0 lead at 6.47.

One minute later, Hertl sliced the deficit in half. The Sharks continued to control the tempo and Hertl recorded his second goal at 14:29 to create a 2-2 tie.