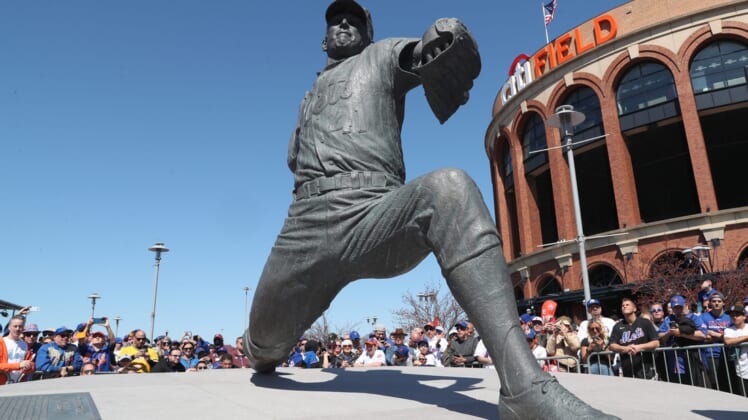 The New York Mets unveiled a statue of Hall of Fame pitcher Tom Seaver on Friday, immortalizing the late legend in bronze and steel outside the entrance to Citi Field.

Seaver died in 2020 at 75. His widow, Nancy, and their daughters, Sarah and Annie, accepted the tribute to him.

“Hello Tom, it’s so nice to have you where you belong,” Nancy Seaver said, tears in her eyes.

“There is a reason he was called ‘The Franchise,'” Cohen said. “You can’t measure what Tom Seaver meant to this organization. This magnificent statue will be a wonderful daily reminder to Mets fans coming to Citi Field that Tom Seaver is forever a Mets legend.”

Seaver pitched from the Mets from 1967-77 and was the dominant National League pitcher of the era, winning Rookie of the Year honors and three Cy Young awards. He was a key member of the Mets’ 1969 World Series-winning team, finishing 25-7 with a 2.21 ERA.

The statue was created by sculptor William Behrends, who immortalized Willie Mays in a statue that stands outside Oracle Park in San Francisco and Tony Gwynn in a monument at Petco Park in San Diego. The 3,200-pound artwork shows Seaver in motion and stands 10 feet high and 13 1/2 feet wide.