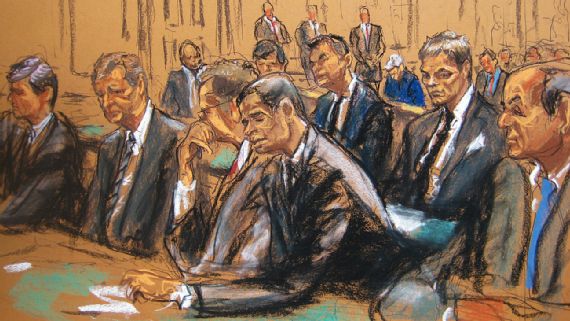 Artist Jane Rosenberg has been sketching out courtroom scenes for 35 years.

However, Rosenberg got destroyed on social media after this ghastly photo she created of New England Patriots quarterback Tom Brady surfaced after his settlement hearing took place last Wednesday. For those who can’t tell who Brady is, he is the second person from the right in the second row.

No matter how horribly Brady is depicted in the photo, the sketch is apparently in high demand by some buyers. Rosenberg said she has at least 20 offers from parties looking into purchasing the sketch.

According to Rosenberg, the sketch would become less valuable the longer it sits around (via ESPN):

“I haven’t really had time to sort through it all,” Rosenberg said. “I just know that each day it sits in my house, the less valuable it gets.”

Something tells us that perhaps the longer Rosenberg holds the sketch hostage, the purchase price might just go up due to Brady’s popularity and the major Deflategate scandal which started this whole ordeal.

Rosenberg said that she received about 700 emails regarding the sketch and some were quite nasty, which aligns with the sentiment that was buzzing about on Twitter after the picture was released.

Rosenberg also noted that a sports museum in Boston inquired about the sketch along with sketches she has done of Dzhokhar Tsarnaev from his Boston Marathon bombing trial. She also said that court sketch artists such as herself can make some extra money by selling their originals to the courtroom attorneys and judges.

Rosenberg is scheduled to be be in court on Wednesday, and she said she was relieved that Brady will unlikely be in attendance due to the fact that settlement talks went nowhere on Tuesday.

“I am just so nervous,” Rosenberg said. “What happens if all the players sat in the same spot and I had to draw him again?”

Poor lady. Imagine her life last week. She reports for work just like any other day and by the end of the evening, she has been ripped to shreds by the vipers on social media that just couldn’t see fit to cut her a break. Rosenberg was practically forced to issue this apology:

Let’s just say Rosenberg will be having the last laugh if her sketchy piece of Brady art turns into a goldmine.