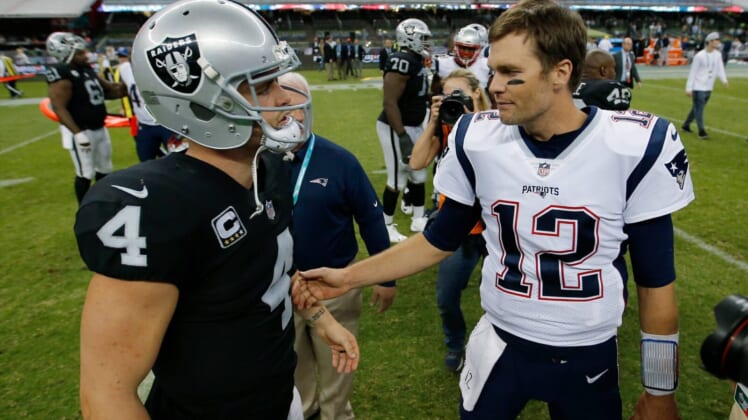 While some Raiders fans get triggered talking or exploring possibilities of upgrades or changes at key positions, one free agent you shouldn’t worry about, according to our own Moe Moton, is Tom Brady.

By now, you’ve read the reports, rumors, opinions, and thoughts about the visual of Tom Brady in Las Vegas wearing the Silver and Black.

Let’s put this out in front. He’s not going to sign with the Las Vegas Raiders.

There are three major reasons why it won’t happen. Before we delve into why Brady won’t join the Raiders in Las Vegas, let’s go through ESPN Adam Schefter’s report on the morning of Super LIV.

According to Schefter, the Raiders are prepared to pursue Brady on the open market. Pay attention to the wording of the report. Right now, it’s a one-way street in terms of interest. Brady hasn’t listed or publicly talked about any particular free-agent destinations.

In their current state, the Raiders sound like an intriguing option for Brady. He may sit at the table to hear owner Mark Davis, head coach Jon Gruden and general manager Mike Mayock’s recruiting pitch out of respect, but the six-time Super Bowl champion will realize Vegas isn’t for him.

Secondly, the New England Patriots want a swift decision, whereas Brady would prefer a thorough approach and engage with other teams.

“New England is expected to want to have a decision made well before the free-agent signing period begins March 18,” Schefter wrote. “But Brady also has said he is “open-minded” about the free-agent process, and other teams are expected to explore the possibility of signing him, according to sources.”

It’s important to note the timeline on a decision. If Brady commits about a month before the draft, he’d have to trust in his team’s plans for April. There’s one issue. The selection process can be unpredictable. The 42-year-old signal-caller will need to see a good fit with a club before the incoming rookie class joins the league.

In their current state, the Raiders sound like an intriguing option for Brady. He may sit at the table to hear owner Mark Davis, head coach Jon Gruden and general manager Mike Mayock’s recruiting pitch out of respect, but the six-time Super Bowl champion will realize Vegas isn’t for him.

Brady will take his time, but he’ll likely come to an agreement with a team before the draft so his front office can adjust its big board accordingly.

At the top of Brady’s priorities, he wants to play with playmakers. Last year, the Patriots scrambled to acquire Mohamed Sanu before the deadline for a talent boost at wide receiver. The trade with the Atlanta Falcons fell flat. The 30-year-old wideout logged 26 receptions for 207 yards and a touchdown.

So, of course, Brady wants to go into the 2020 season with multiple high-end playmakers on offense.

According to Football Outsiders, the Raiders offensive line ranked fifth in run blocking and sixth in pass protection this past season. Running back Josh Jacobs proved he can carry the majority load after sharing touches through three years at Alabama. Tight end Darren Waller had a breakout 2019 term, logging 90 receptions for 1,145 yards and three touchdowns.

There’s one issue. Which wide receiver can Brady depend on as his go-to guy? In New England, he had Julian Edelman for a decade. They needed four seasons to click on another level. The wideout had 714 receiving yards and four touchdowns between the 2009 and 2012 campaigns.

Tyrell Williams should have a better year if he fully recovers from plantar fasciitis, but the fifth-year veteran has been a decent No. 2 option for most of his career with only one 50-plus catch season on his resume.

Rookie fifth-rounder Hunter Renfrow exceeded expectations, recording 49 receptions for 605 yards and four touchdowns, but he’s not capable of taking over a game with consistency out of the slot at this stage in his career. Brady doesn’t have much time to wait.

More importantly, who’s the red-zone threat? Waller hauled in three touchdown receptions this past season. Williams led the team with six and five of them came in the first eight weeks.

Lastly, NFL Network’s Ian Rapoport noted the Los Angeles Chargers would be interested in Brady on the day of Super Bowl LIV:

If Brady prioritizes weapons, Keenan Allen and Mike Williams along with Hunter Henry, Austin Ekeler or Melvin Gordon sound like a better set of pass-catching options if two of the last three players re-sign with the team. Despite questions about Los Angeles’ offensive line, the group ranked ninth in pass protection, per Football Outsiders.

In terms of wide receiver weapons, the Raiders don’t have an alluring group that generates a ton of excitement. If defenses limit Waller, what’s plan B in the passing attack?