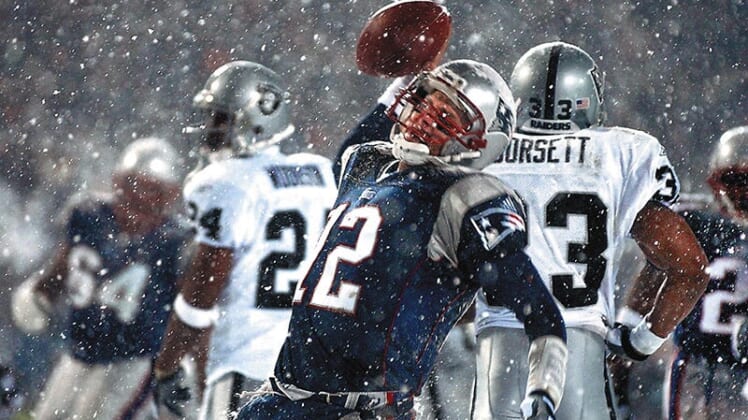 For those who witnessed it, everyone remembers the Tom Brady Tuck Rule. To the then-Oakland Raiders, it was a crushing blow their coaches, players and fanbase will never be able to forget. And for TB12 and the New England Patriots, it was the beginning stages of a dynasty, one that may be recognized as the greatest period of dominance of all time. I know it still haunts Charles Woodson in his dreams.

In the AFC Divisional Playoff game on January 19, 2002, the Raiders were leading the Patriots 13-10 with Brady marching down the field in a blizzard when Woodson drills Brady, knocking the ball loose for the Raiders to recover. Only the referees cited the tuck rule and overturned the call, allowing the Patriots to keep possession as if it were an incomplete pass.

We all know what happened next. After the Patriots got into field-goal range, Adam Vinatieri made one of the best kicks in NFL history to push the game into overtime, where he converted another field goal to win the Lombardi Trophy.

Years later, in 2013, NFL team owners voted to eliminate the tuck rule from the official rulebook, but it could never make things right in the eyes of some.

Though, 20 years later, Tom Brady may finally be ready to start working toward admitting he, you know, might have fumbled the ball. Check out his comical 11-second clip he shared on his Twitter account Thursday morning. It even features Justin Bieber.

Yeah, why not own up to it now. Nothing to lose at this point, no one is taking the Super Bowl ring off his hand. Winning six more in his career, while the Tuck Rule game may have helped him get his first, it didn’t make TB12 into the GOAT, he did that himself.

If you ask anyone from the Raiders to this day, they’ll all tell you Brady fumbled, and of course, you’ll find the opposite response from those affiliated with TB12 and the Patriots. That’s just the nature of competitive sports, when sometimes honesty gets clouded by fandom. It is what it is. Brady did fumble though.