One of Tom Brady's rarest rookie cards took over two decades to sell, but when it finally did, an anonymous buyer smashed the record for such a sale. 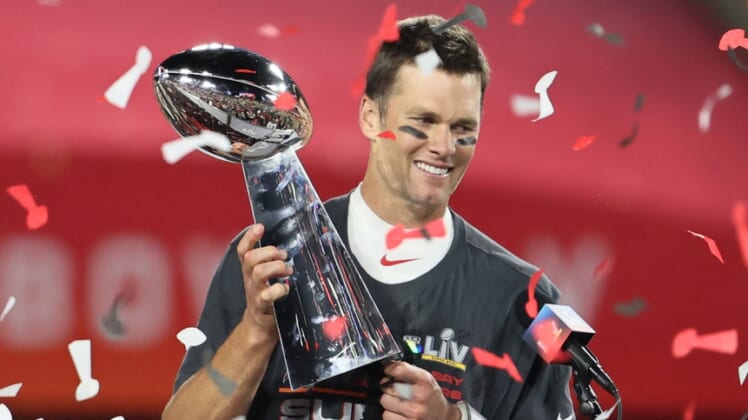 Tom Brady is the best quarterback of all-time, and on Saturday, TB12 added another record to his resume when his New England Patriots rookie card sold for a whopping $2.25 million.

ESPN’s Tom VanHaaren reported the news of Brady’s unprecedentedly expensive rookie card sale, which was purchased by an anonymous buyer and was one of only 100 cards manufactured of its kind.

Brady spend his first 20 seasons in the NFL with the Patriots organization before leaving for the Tampa Bay Buccaneers in 2020. The 43-year-old legend won his seventh Super Bowl with the Bucs and earned MVP honors in the Big Game for the fifth time.

To say the least, Brady has come a long way from his rookie season, which saw him enter the NFL as the 199th overall pick in the sixth round of the 2000 NFL Draft.

After appearing in just one game during his maiden pro campaign, Brady famously stepped in for an injured Drew Bledsoe and never looked back. He led the Patriots to a huge upset victory over the St. Louis Rams in Super Bowl XXXVI that year, and helped New England to two more championships within the next three years.

Patriots head coach Bill Belichick is famous for parting ways with star veteran players, and often gets it right. Unfortunately, Brady and Belichick couldn’t figure out a way for the QB to finish his career in Foxbourough, which led to his exit to Tampa Bay.

The Buccaneers kept all 22 of their starters from their Super Bowl LV-winning team on the roster for 2021, and are seeking to become the first team to win back-to-back championships since Brady’s Patriots in Super Bowls 38 and 39.