Fans of the San Francisco 49ers and Miami Dolphins still rooting for a surprise Tom Brady trade are going to be disappointed. The future Hall of Fame quarterback is trying to recruit a super team, but he wants players to join him on the Tampa Bay Buccaneers.

Even after the NFL MVP runner-up unretired and announced his return to Tampa Bay, some fans held out hope for him orchestrating a trade. It even culminated in NFL rumors suggesting the seven-time Super Bowl champion would play for the Dolphins in 2022.

That’s simply not the case. The 44-year-old quarterback is committed to vying for another Lombardi Trophy with the Buccaneers this fall and he’s making a push to help the team get even stronger.

According to Jeff Howe of The Athletic, Brady is actively recruiting some of the top NFL free agents still available to sign with the Buccaneers.

It shouldn’t come as a surprise. Brady reportedly tried to convince guard Alex Cappa to return instead of signing with the Cincinnati Bengals. He also called wide receiver Russell Gage Jr., convincing him to sign with Tampa Bay over other NFL teams.

It should come as no surprise that Brady wants Rob Gronkowski to re-sign with the Buccaneers. For now, his close friend and future Hall of Fame selection is undecided on his plans. While Gronkowski weighs his future, there are other free agents for Brady to target. 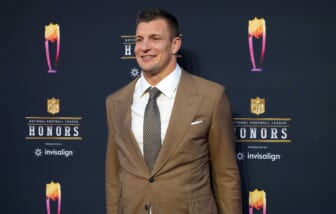 While wide receiver isn’t the biggest need on Tampa Bay’s roster, there could be a push for Julio Jones. Chris Godwin is recovering from a torn ACL and Tampa Bay could see a benefit in adding another trusted weapon for Brady. While the Buccaneers almost never used four-receiver sets in 2021, they could alternate snaps between Gage and Jones.

Brady is also very comfortable recruiting defensive players to join the team. Tampa Bay strengthened its secondary with Logan Ryan, but it could improve its depth in the front seven. Brady’s connection with linebacker D’Onta Hightower could prove beneficial for the Buccaneers. If the franchise wants another edge rusher, Melvin Ingram and Jerry Hughes are compelling options.

Given Brady has already demonstrated an ability to sell players on signing with the Buccaneers, it wouldn’t be a surprise if another big move comes.