Instagram can be a dark place for public figures who prefer to avoid Internet trolls, and when it comes to NFL players, no one gets it worse than superstar quarterbacks Tom Brady and Patrick Mahomes.

According to an article by The Action Network, there have been 4,870,126 posts about Brady on Instagram, and approximately 740,260 of them have been negative.

The sheer amount of negative IG posts about Brady nearly outnumber the total posts about the rest of the 10 most-trolled NFL players on the popular social media platform. Here’s a look at the top 10:

The Action Network actually compared the negative post tally to the capacities of the players’ stadiums, which provides unique insight into just how many people apparently don’t have anything better to do than troll NFL stars.

Why are Tom Brady, Patrick Mahomes and other top NFL stars disliked?

Trolls are green with envy for the most part, or feel bad enough about themselves to project their own baggage onto others behind the cloak of online anonymity or a false Internet personality.

So many people love to hate Brady, yet it’s hard to at this point, unless you’re just downright jealous. He won a Super Bowl in his first season with Tampa Bay after two decades with the New England Patriots. TB12 is the GOAT. Move along!

Quarterback is the most scrutinized position in all of American sports. It’s no surprise that seven of the top 10 players are field generals. What is interesting is that Instagram users apparently have a fair amount of respect for reigning NFL MVP Aaron Rodgers and Mahomes, given their low negative post percentages.

Hard not to love what Rodgers did, essentially giving the Packers a middle finger this past season after they traded up to draft Jordan Love in 2020. And if you can’t root for Mahomes, you probably don’t like football, or again, are just jealous of his legendary talent.

Drew Brees also has the respect of most IG users who post about him. He just wrapped up a phenomenal career with the New Orleans Saints, and might’ve won a second Super Bowl if injuries didn’t catch up to him so much.

The Philadelphia Eagles’ fans have a penchant for booing their own players often. There’s some friendly fire going on there with the trolling of QB Jalen Hurts, and given the organization’s recent dysfunction, he’s an easy target right now.

That iconic Silver and Black and the presence of Jon Gruden make the Las Vegas Raiders a perpetual lightning rod. Derek Carr has actually played very well over the past two seasons. That won’t stop people from trolling him, apparently. 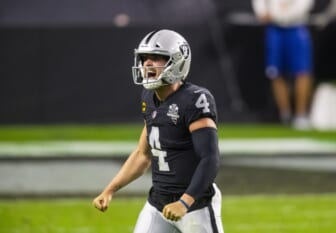 But finally, to cap this journey off, why would anyone even bother trolling Los Angeles Rams defensive lineman Aaron Donald?

A three-time Defensive Player of the Year, Donald is one of the most freakishly strong, intimidating players in NFL history. Don’t try this man. Be better, IG trolls!