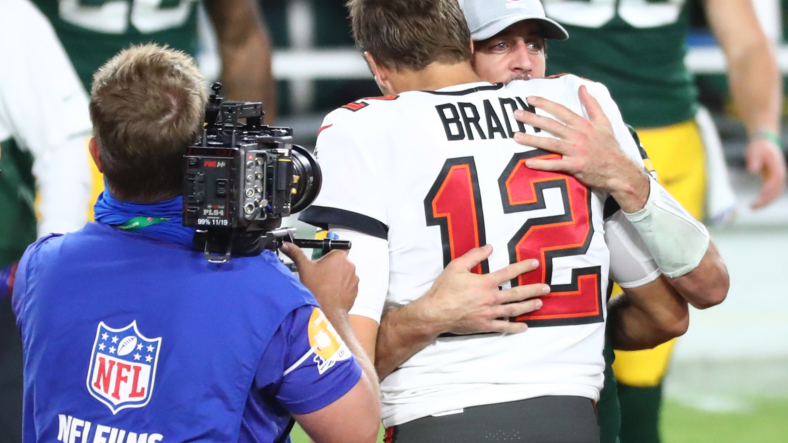 Two of the NFL’s best quarterbacks, not only of today but also in the history of the sport, are set to go head-to-head on Sunday afternoon in what’s set to be the game of the week. When Aaron Rodgers and the Green Bay Packers take on Tom Brady and the Tampa Bay Buccaneers, you can bet millions of fans will have their stations tuned into the game.

It’s not a playoff matchup, but any time these two quarterbacks match up, it feels like the stakes are at their highest. Perhaps it’s because they’re both always at the top of their game, no matter the location or time of year.

During his Thursday press conference, Brady was asked about facing off with Rodgers once again. Here are some of his comments.

While we’ve seen plenty of their battles on the football field, the two have even teamed up on the golf course and have gotten to know each other fairly well over their two decades of sharing the gridiron. It’s clear Brady has a high amount of respect for his fellow former MVP quarterback.

These two future Hall of Fame QBs have gone toe-to-toe a total of five times in their career. Four times in the regular season and once in the playoffs. When he was with the New England Patriots, Tom Brady was 2-1 against Aaron Rodgers. He’s since gone 2-0 since joining the Buccaneers, giving him an all-time record of 4-1 against the four-time NFL MVP, including their NFC Championship matchup in January of 2021.

Since the defenses have changed drastically, not only by team but also by players and scheme, it doesn’t do us much good to compare their passing stats against one another. So far, Brady’s team has, more often than not, emerged as the winner. Will that remain true on Sunday, as the Bucs host the Packers at Raymond James Stadium?

Vegas sees Brady’s crew as one-point favorites as of now, but there’s a lot of time between now and the game on Sunday. We do already know he won’t have his top target, with receiver Mike Evans suspended after violating the league’s personal conduct policy last Sunday when he shoved Saints cornerback Marshon Lattimore to the ground. Brady will have to lean on his other cast of receivers, like Julio Jones, Breshad Perriman, and Russell Gage, to get past Rodgers again.