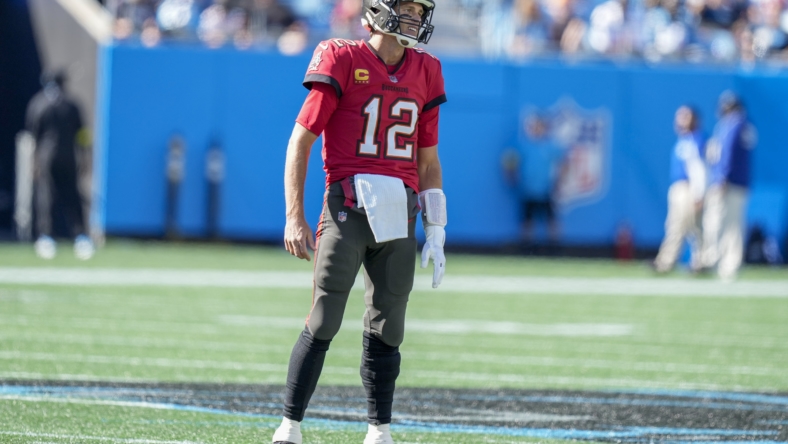 Tampa Bay Buccaneers quarterback Tom Brady is goming off another brutal performance in a 21-3 loss to the Carolina Panthers just a few short days ago.

A lot has been made about the performance of Tom Terrific and the Buccaneers’ offense during their ugly 3-4 start to the season. Most recently, this unit has scored just one touchdown in its past 23 possessions.

Immediately ahead of Thursday night’s kickoff from Tampa Bay, Brady was seen showing a ton of emotion inside Raymond James Stadium.

Brady knows well well that it’s put up or shut up time for the Buccaneers. A loss at home Thursday evening would have the team at 3-5 with games coming up against playoff contenders in that of the Los Angeles Rams and Seattle Seahawks ahead of a Week 11 bye.

Despite still being in first place in the pedestrian NFC South, there’s a sense of urgency in this game for Brady and Co.

Pressure squarely on Tom Brady and the Tampa Bay Buccaneers

So, nothing in this game is given to you. You have to go earn everything and I think that’s the competitive nature of it. They’re good on the other side of the ball, too. We’ve just got to go find a way to get a win.”

At 45 years old, Brady has pretty much been through everything on the football field. He knows exactly how to handle situations like this despite a lack of experience with losing.

Unfortunately, it also appears that the future first ballot Hall of Famer is more frustrated this season than in the past. He’s taken said frustration out on both tablets on the sideline and his own offensive linemen. It’s one thing to be fired up. It’s a completely different thing to let the emotions get the best of you. We’re sure Mr. Brady knows the difference.

For most quarterbacks, those numbers would seem to be tremendous. But as we all know, Brady is not your typical signal caller. Here’s a dude who put up 5,316 yards while leading the league with 43 touchdowns en route to finishing second to Aaron Rodgers in the NFL MVP voting last season.

The Bucs hope that can get that iteration of Brady starting Thursday evening and moving forward on the season.