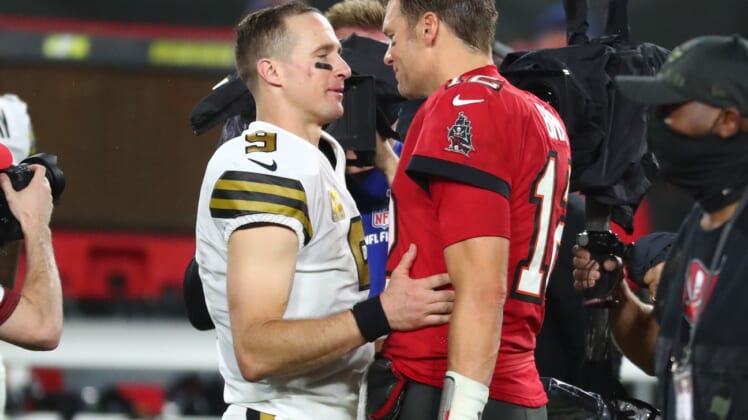 Coming off his seventh Super Bowl title, Tom Brady is considered the greatest quarterback in modern NFL history. There’s a huge gap between him and other signal callers of the generation. However, recently-retired former New Orleans Saints signal caller Drew Brees would likely come in second on that list.

Brees, 42, announced on Sunday that he’s stepping away from the game at the age of 42. He finishes his career No. 1 in league history in passing yards and second in passing touchdowns, behind the above-mentioned Tom Brady.

The two entered the NFL one year apart and were rivals in college with Brady playing at Michigan and Brees suiting up for Purdue. Needless to say, their careers crossed paths more than once. Brady now has something to say about his former rival.

“Congrats my friend on an incredible career. Thank you for the inspiration and dedication on and off the field! Look forward to seeing what’s next,” Brady wrote on Twitter.

It might be minor in the grand scheme of things. But it does go to show us that quarterbacks in the NFL are like a brotherhood. Given the success both Brady and Brees enjoyed at the highest level football has to offer, respect has to be the name of the game.

Interestingly enough, Tom Brady’s Buccaneers defeated Brees and the Saints in the NFC Divisional Playoffs this past January in New Orleans. It would ultimately be Brees’ final game in the NFL.

After the game, Brees was seen out on the field conversating with Brady. At that point, it seemed to be a foregone conclusion that the Saints’ legend was going to call it quits. While the process took some time, it became official on Sunday.

Brady knows full well what Brees has meant to both the Saints and the city of New Orleans after signing with the team 15 years ago on Sunday. He was not going to ignore the gravity of Brees’ retirement.