After failing to sweep the Habs on the road in a 3-2 overtime loss in Game 4, the Bolts bounced back, and got to hoist Lord Stanley’s Cup in front of the home fans.

While there were some notable reactions from the reigning Super Bowl champion Bucs, the following exchange between TB12 and the Lightning’s official Twitter account was priceless:

Brady infamously had a little too much tequila during the Bucs’ championship boat parade, and chucked the Lombardi Trophy to the next boat over. Thankfully, tight end Cameron Brate has great hands, and had the wherewithal to grab it before the hardware plummeted to the watery depths.

That would’ve been a fitting fate for some Bucs booty, no? In any event, it’s great to see that Brady and the Lightning both have a good sense of humor about his dangerous trophy toss. 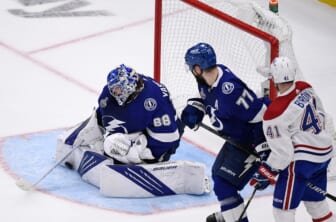 Many are projecting the Buccaneers to have another phenomenal season after they won a championship in Tom Brady’s maiden season with the team. They’re returning an excellent nucleus of players, and will be one of the clear favorites.

The last time an NFL team won back-to-back Super Bowls? That would be the Brady-led New England Patriots, who won championships in the 2003 and 2004 seasons.

It’d be quite something if another major sports franchise in Tampa Bay pulled off a repeat. “Champa Bay” is really catching on as a city nickname. That’s even better than Tompa Bay.

Anyway, without further ado, here are the best of the rest of the Bucs’ reactions, including that of Arians: