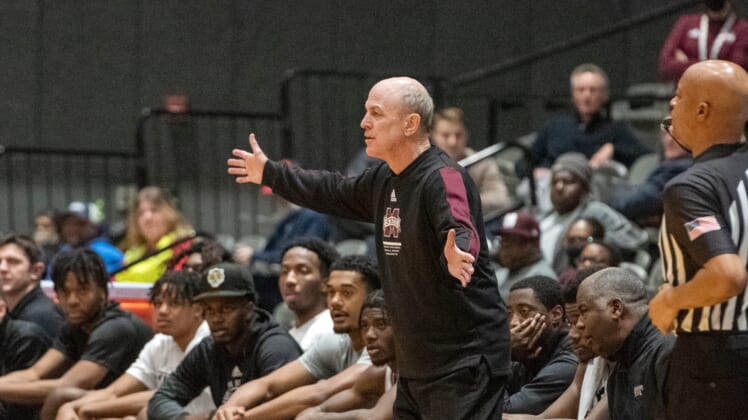 Mississippi State head coach Ben Howland reacts to a play in the first half of the NCAA basketball game against Winthrop at the Mississippi Coliseum in Jackson, Miss., Tuesday, Dec. 21, 2021.Tcl Ms State Winthrop06

Tolu Smith scored 18 points, Shakeel Moore shot 3-of-4 from 3-point range en route to 15 points, and Mississippi State cruised to an 81-68 win over Arkansas on Wednesday in Starkville, Miss., in the Southeastern Conference opener for both teams.

Mississippi State also enjoyed a crucial 22-of-28 to 10-of-14 advantage at the free-throw line. Foul trouble limited Davonte Davis to just nine minutes in the first half, striking a blow to an already-depleted Arkansas lineup.

The Razorbacks (10-3, 0-1) were without JD Notae, their leading scorer at 18 points per game. Notae and Chance Moore were announced as scratches from the lineup shortly before tip-off due to illness.

Stanley Umude led Arkansas with a game-high 19 points off the bench. Davis scored 15 points despite the early foul-trouble hindering his playing time.

Arkansas shot just 11 of 28 (39.3 percent) from the floor in the first half while adjusting without their top scorer. Mississippi State’s own struggles at 2-of-9 from 3-point range and 12-of-29 (41.4 percent) overall kept it close, with the Bulldogs taking a 33-31 lead into intermission.

Mississippi State created gradual separation throughout the second half thanks to Iverson Molinar, who scored 12 of his 16 points after halftime. Moore went 2-of-2 from long range in the second half, and Andersson Garcia shot 3-of-3 to score all seven of his points after the break.

Molinar scored four straight points that pushed the Mississippi State lead to 12 points with almost 12 minutes remaining. The advantage never dipped to single digits again and swelled to as many as 16 points for the Bulldogs.

Arkansas’s Jaylin Williams scored nine points and grabbed seven rebounds but shot just 4 of 10 from the floor, and Chris Lykes scored 10 points on 3-of-9 shooting.