The UFC’s fondness for staging rematches will be on full display Saturday night when the promotion headlines UFC 268 at New York’s Madison Square Garden with a pair of reheated title matchups.

The main event is a reprise of a 2019 title fight. Usman, a Nigerian who fights out of Colorado, broke Covington’s jaw with a punch and won via fifth-round TKO.

Covington, of South Florida, has only fought once since, defeating Tyron Woodley in September 2020. The UFC saw fit to give him another title shot ahead of other contenders, including Great Britain’s Leon Edwards, who has won nine consecutive fights. 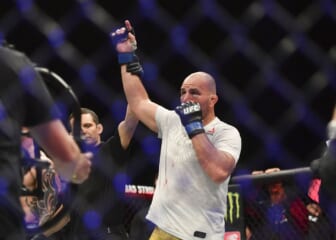 Covington, who plays the role of pro wrestling bad guy to get attention, claims the champ wants no part of the rematch.

“Usman and his team did not want it to happen,” Covington told ESPN. “They were refusing and trying to find every way in the book out of this rematch. They didn’t want this fight, man. And the only reason they have to take it is the UFC gave them no choice.”

The promotion wasted no time rebooking Namajunas vs. Weili. The duo fought at UFC 261 in April, with Denver’s Namajunas (10-4) winning via head-kick knockout in 1 minute, 18 seconds. The victory made Namajunas the first woman ever to regain a UFC title she had previously held.

Weili (21-2), who had a 21-fight win streak snapped with the defeat and was the first UFC champion ever to hail from China, will get an immediate chance to become the second, as neither has fought since.

For her part, Weili says she’s using her opponent’s path as her blueprint.

“Rose lost the belt and then regained it, and I feel I can do that, too,” Weili said.