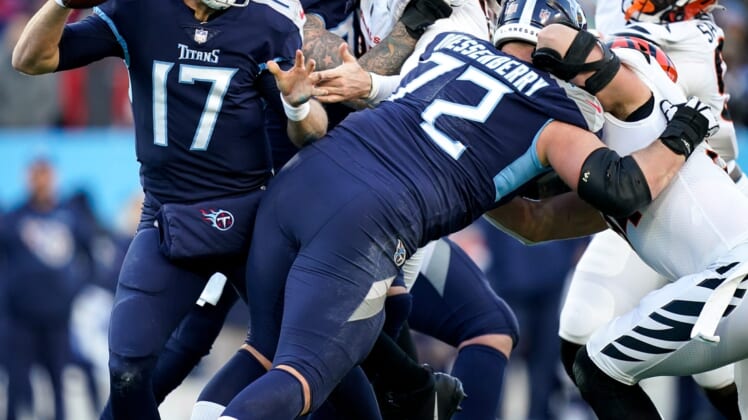 The writing could be on the wall for Ryan Tannehill after the Tennessee Titans picked Liberty quarterback Malik Willis in the third round of last week’s NFL draft.

While Tannehill has two seasons remaining on a four-year, $118 million deal, the Titans had at least one eye toward a possible replacement by picking Willis.

Just one thing — Tannehill, who turns 34 in July, isn’t all that thrilled about helping someone become good enough to take his job.

“That’s part of being in a quarterback room, in the same room — we’re competing against each other, we’re watching the same tape, we’re doing the same drills,” Tannehill said during a press conference on Tuesday. “I don’t think it’s my job to mentor him. But if he learns from me along the way, then that’s a great thing.”

Tannehill said he did send Willis a text message after the selection.

Perhaps part of the reason Tennessee was in the quarterback market was due to Tannehill’s massive meltdown in the postseason against the Cincinnati Bengals last January.

The Titans were the top seed in the AFC but Tannehill tossed three interceptions in the 19-16 loss. The final one came with 20 seconds left to set up the Bengals’ game-winning field goal.

Tannehill said he talked with a therapist — and had many sessions — to work through the pain, despair and heavy loss of sleep.

“It’s a deep scar,” Tannehill said of the disappointing loss. “Every time I closed my eyes I kind of re-watched the game. I didn’t get a whole lot of sleep for weeks. I was in a dark place and it took me a while, a lot of work to get out of it.

“I’ve worked through it, but therapy, talking to people, time helped. It took a lot of work to get through it.”

Tannehill said he had previously been seeing a therapist but the painful loss prompted a deeper level of depression.

“This is the first time that I absolutely needed (therapy) to pull me out of a dark space,” Tannehill said.

Tannehill also said he was stunned that his top target, wideout A.J. Brown, was traded to the Philadelphia Eagles during the first round of the draft last Thursday.

He knew Brown was unhappy with his contact but wasn’t expecting a draft-night trade.

“I was shocked. When I first found out, I’m like, ‘This isn’t real, this isn’t happening, it’s a rumor,'” Tannehill said of the Brown swap. “And then, I talked to A.J. and found out it was real. I slept terrible that night and kept thinking it was just a bad dream, but that’s where we’re at.”

Tannehill passed for 3,734 yards, 21 touchdowns and 14 interceptions last season. Though his yardage was on par with his superb 2020 season (3,819), his touchdowns were a sharp drop from his career-high 33 and he doubled the seven picks from that season.