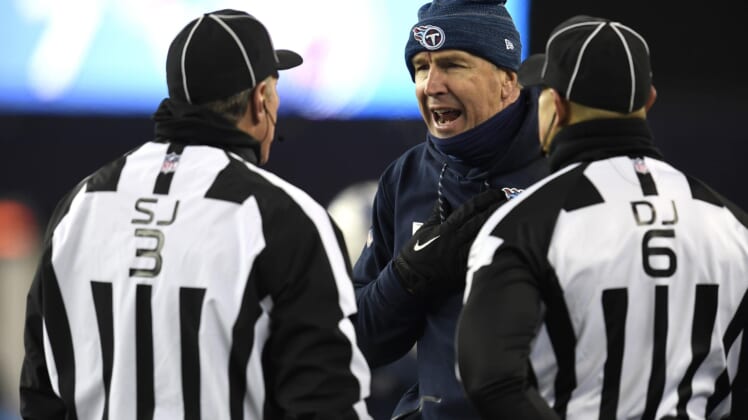 Over two-touchdown underdogs on the road Saturday night against the New England Patriots, it was already apparent that the Tennessee Titans were facing an uphill climb. Some home cooking from officials surely didn’t help matters here.

Despite jumping out to a 7-0 first quarter lead, the Titans saw themselves completely outplayed for the remainder of the game, losing by the score of 35-14. The game itself was never really close after the first quarter.

Even then, embattled Titans head coach Mike Mularkey decided it made sense after the game to focus on a couple questionable calls.

With New England facing fourth-and-five from their own 14 in the first half, the Patriots were originally called for a false start. That’s when officials decided to reverse their call, indicating that the Titans had jumped off-side themselves. Mularkey wasn’t having any of it.

“No, at that point, I got tired of the explanations I was getting. So no, I did not,” Mularkey said when asked about what the officials told him, via CBS Sports.

The call gave New England a first down, ultimately leading to a touchdown.

Later in the second quarter, Marcus Mariota hit Eric Decker on a 13-yard pass on third down. But officials decided to call the receiver for offensive pass interference.

Here’s a look at the play.

Cmon @nfl refs. Once again impacting the game with BS calls. The flag was only thrown at the end of the play after @EricDecker87 caught the ball. Coincidence? ? #TENvsNE @Titans @espn pic.twitter.com/Q2yDGUQjUs

You can be the judge there. But it was questionable to say the least. At which point, Mularkey had this somewhat interesting take.

“That one, I won’t even talk about,” Mularkey said. “That one goes down in history.”

It’s rather clear that officiating favored New England in this one. Any objective observer would tell you that. Then again, the Patriots ran off five consecutive touchdowns before Tennessee put up a garbage-time score.

Maybe Mularkey’s central focus should have been on how much his Titans were outplayed, outcoached and outclassed in this one. Just some food for thought.