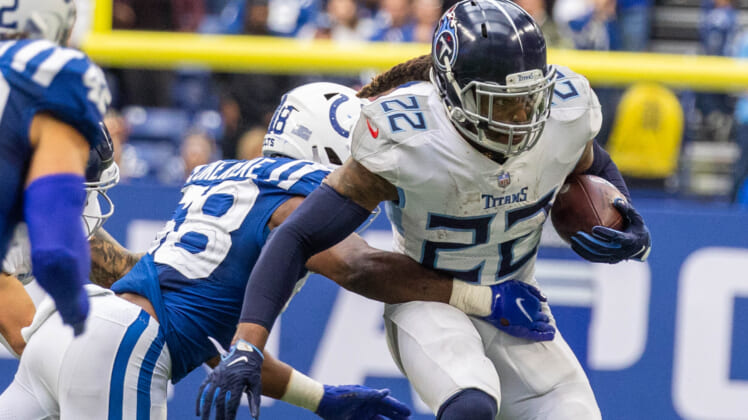 The Tennessee Titans suffered a devastating blow on Oct. 31 when star running back Derrick Henry suffered a broken foot against the Indianapolis Colts. Fortunately for the AFC South leader, the All-Pro runner could return to the lineup just in time for his team.

Henry suffered the injury during Tennessee’s win over the Indianapolis Colts, but managed to fight through the pain. It was evident the 6-foot-3, 247-pound running back wasn’t the same, averaging just 2.4 yards per carry and failing to break off a 10-yard run.

The Titans placed Henry on injures reserve, knowing a best-case scenario would see him potentially return at the end of the season with his teammates in the playoff hunt. Fortunately for Tennessee, that appears to be what’s going to happen.

According to NFL Network’s Ian Rapoport, Henry is on track to return for the playoffs. He is scheduled for an appointment with doctors in the coming days to determine how far along he is in his injury recovery. But there is optimism in the Titans’ building that Henry will return to the backfield.

Despite missing more than five games, Henry remains one of the leading rushers in the NFL. Entering Week 14, he ranked fourth in carries (219), rushing yards (937) and rushing touchdowns (10). The numbers are even more impressive considering his performance against the Colts came on a broken foot.

There is even some hope that Henry could suit up in Week 18, when the Titans face the Houston Texans. It would be a fitting matchup for Henry, who rushed for 462 yards in two games against the Texans’ defense in 2020.