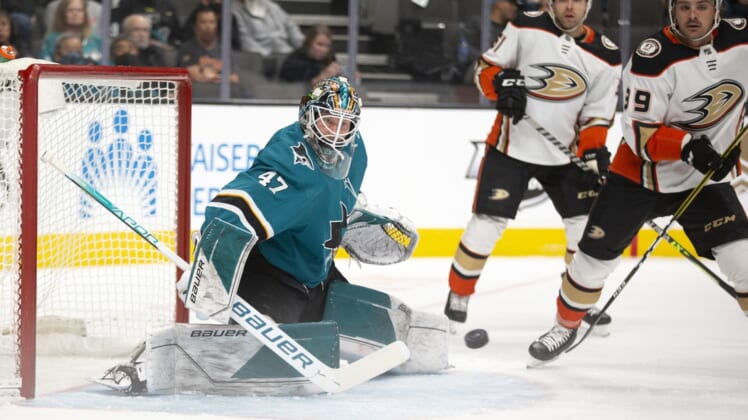 Timo Meier had a hat trick for the San Jose Sharks in a 4-1 win against the visiting Anaheim Ducks on Saturday night.

Meier notched the third hat trick of his NHL career with his 30th goal of the season, stretching the lead to 4-1 with 4:05 left.

Marc-Edouard Vlasic also scored, Alexander Barabanov and Tomas Hertl each had two assists and James Reimer made 27 saves for the Sharks, who have won three of four.

Gerry Mayhew scored his first goal since he was claimed off waivers by Anaheim on Sunday, and Lukas Dostal made 20 saves in his first start since Jan. 15 for the Ducks, who dropped their ninth in a row (0-7-2).

Ryan Merkley brought the puck from the Anaheim blue line to the bottom of the right circle before taking a shot that was blocked by Kevin Shattenkirk. The puck came back to Merkley and he passed it to Vlasic in the high slot.

Vlasic briefly paused before sending a slap shot past Dostal for his third goal of the season.

Meier gave the Sharks a 2-0 lead at 1:41 of the second period. Barabanov tipped the puck away in the Anaheim zone and Meier took possession in the right circle before spinning and shooting it past Dostal.

Mayhew prevented Reimer from collecting his second shutout of the season when he scored at 1:05 of the third period to cut San Jose’s lead to 2-1.

Meier re-established the two-goal lead when he scored a power-play goal from the left circle with help from a screen by Hertl to make it 3-1 at 3:56.

The Ducks outshot the Sharks 5-0 the first 7 1/2 minutes of the game, and Reimer made clutch saves on Troy Terry, Simon Benoit and Trevor Zegras to keep the game scoreless until Vlasic got the Sharks on the board.