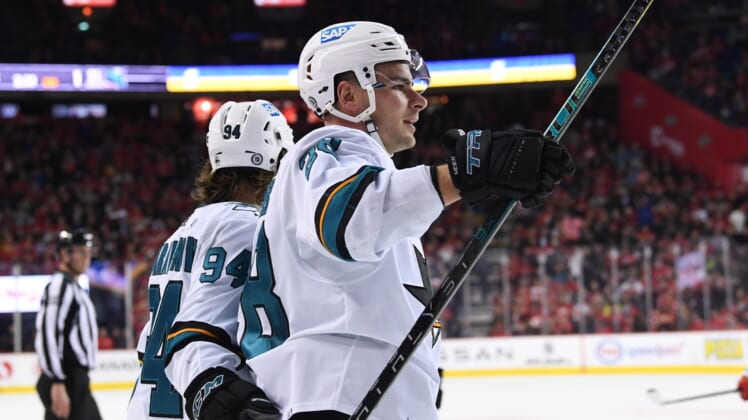 While the San Jose Sharks have struggled to live up to the kind of season they envisioned, Timo Meier continues to meet all expectations.

Meier will carry the Sharks into a road game against the Arizona Coyotes on Wednesday at Glendale, Ariz., fresh off a hat trick Saturday against the Anaheim Ducks.

The game against the Coyotes gives Meier the opportunity to reach a career high in goals scored. His three Saturday gave him 30 on the season, matching his total from the 2018-19 season. He is also one point away from matching his career best of 66 set in that same 2018-19 season.

Despite the personal success, Meier is trying to keep it all about the team. While it was mission accomplished against the Ducks, the Sharks are just 29-28-8 (66 points) this season, making it a tall order to close the gap in the Western Conference in order to land a wild-card spot for the playoffs.

“Obviously, I love scoring goals, that’s no secret, but for me, the main focus is to win games,” Meier said. “My goals are with the team. I try to be the best player I can be for the team and contribute in that way.”

Meier is doing his best to not be affected by the lack of team success, although San Jose has been better of late, winning three of their last four games. Meier has a point in all four games (five goals, two assists) after recording a single assist in a three-game losing streak that preceded this recent run of success.

“Timo’s skating well, and when he shoots the puck like he is, it’s nice to see him get rewarded,” Sharks head coach Bob Boughner said. “He’s had a great season and he’s not stopping.”

Tomas Hertl also had a feel-good moment in Saturday’s victory for San Jose. His two assists, both on Meier goals in the third period, gave him 28 for the season and 200 for his career.

The Coyotes enter on a six-game losing streak marked by some dreadful play. Arizona has not scored more than two goals in any of the defeats and has given up an average of 4.0 goals per game in the stretch.

Arizona’s Clayton Keller had a spectacular run of five goals and nine assists as the Coyotes went 6-1-0 from March 3-15. He scored a goal in a 4-1 loss to the Pittsburgh Penguins on March 19 to extend his points streak to eight games, but also left that contest in the third period with an injury.

And while he has played every game since, Keller has just two goals and an assist over the last six contests. He scored Arizona’s lone goal in Monday’s 6-1 defeat to the Edmonton Oilers.

“It’s a tough schedule, we know that and we’re pretty banged up right now,” Coyotes coach Andre Tourigny said. “Mentally, we were a little bit tired and a little bit off.”

The Coyotes’ Lawson Crouse, who has reached 20 goals for the first time in his career, left Monday’s game with an apparent hand injury.