During Thursday Night Football, Dallas Cowboys running back Tony Pollard once again showed why he should be starting over Ezekiel Elliott. Pollard racked up 71 rushing yards on just seven carries, including a 58-yard touchdown to help the Cowboys get to a ten-point lead. Meanwhile, Elliott had just 45 yards on 13 carries, with his longest rush going for ten yards.

While it may be unwise to overreact to one recent example against a top-notch defense, this isn’t some recent trend. Pollard has been outperforming Elliott for three consecutive seasons now, he just doesn’t receive as many touches as Zeke. Let’s take a closer look at more eye-popping stats suggesting Pollard should be the Cowboys’ starting running back instead.

To be fair, Elliott is reportedly dealing with a knee bruise that could linger for the rest of the year, but the truth is, he’s been slipping for a few seasons now. Zeke simply isn’t the same explosive back we saw during his first four seasons in the league.

The analytics-based Pro Football Focus grades Elliott as the tenth-least elusive running back in the NFL this season. This places him in the same company as the towering Latavius Murray, who’s 6-foot-3 along with David Johnson and Carlos Hyde, who are on two of the worst teams in the entire NFL in the Texans and Jaguars.

In fact, Zeke has only forced a grand total of 15 missed tackles across 160 carries in 2021. Just to compare this stat to a few other backs who excel at making tacklers miss, Minnesota’s Dalvin Cook has forced a total of 37 missed tackles on 172 carries. Cleveland’s Nick Chubb has caused 41 tacklers to miss on 150 attempts.

Compared to Pollard, who’s forced 23 missed tackles across 100 carries, and it’s easy to see how Pollard is more effective in open space than Zeke.

According to PFF, Pollard also ranks 13th in breakaway rate. Zeke ranks 37th. Breakaway percentage is defined by “which runners earn the highest and lowest percentage of their yardage on big plays, which are designed runs of 15 yards or more”. 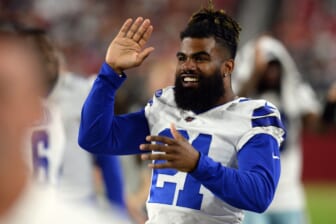 The Dallas Cowboys selected Tony Pollard in the fourth round of the 2019 NFL Draft out of Memphis. Pollard has averaged more yards per carry than Elliott for all three of his seasons.

Another obvious factor that drastically separates the two is their contract status. Zeke was signed to a six-year $90 million contract in 2019, an average of $15 million per season. Pollard is still on his rookie contract, making a total of just over $3 million over a four-year span.

What should the Dallas Cowboys do with Ezekiel Elliott?

Other than bench him for Pollard, they shouldn’t do anything crazy with Zeke.

What can they do? The time to capitalize on any trade value has long gone. No team in the NFL would give up more than say a third-round pick for Zeke, even that might be generous.

One of the issues with a potential Zeke trade is his overvalued contract. If the Cowboys cut Elliott, there’s a dead cap charge of just over $30.8 million in 2022.

A more likely possibility would be Zeke renegotiating his contract once again. If Elliott refuses, the Cowboys are stuck paying a backup-level running back a salary ranking within the top-six at his position. Does Jerry Jones know his star running back is stealing from him?