Timberwolves use balanced attack to soar past Rockets 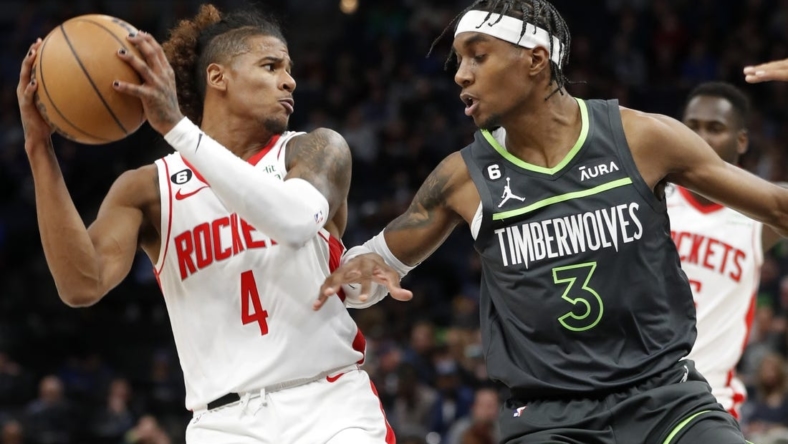 Karl-Anthony Towns scored 25 points to lead seven players in double figures as the Minnesota Timberwolves snapped a three-game losing streak with a 129-117 win over the visiting Houston Rockets on Saturday in Minneapolis.

Anthony Edwards scored 19 points, Kyle Anderson and Taurean Prince added 16 apiece, and Jaden McDaniels and D’Angelo Russell had 13 each for Minnesota, which shot 61.3 percent from the field and led by as many as 24 in the third quarter.

Houston lost its sixth straight and has just one victory in its first 10 games. Jalen Green led the Rockets with 21 points, while Kenyon Martin Jr. and Alperen Sengun added 17 apiece. Rookie Tari Eason also contributed a career-high 17 points off the bench.

Naz Reid scored 11 points and Jordan McLaughlin matched a career high with 11 assists for Minnesota, which has won six of its last seven meetings against the Rockets. Towns finished with nine rebounds and six assists.

The Wolves played without center Rudy Gobert, who entered the NBA’s COVID health and safety protocols prior to the game.

Minnesota held a 19-point lead at the half before Houston opened the third quarter with a 11-3 run.

The Wolves quickly regained control and moved ahead 95-73 on Reid’s 3-pointer with 4:10 left in the quarter.

Houston, which is opening the season with 10 of its first 13 games on the road, trailed 103-83 entering the fourth quarter.

Kevin Porter Jr. finished with 13 points and Eric Gordon had 11 for the Rockets, who trailed by double digits throughout the final period.

Both teams stormed out of the gates in a high-scoring first quarter. Houston shot 68.8 percent from the field, but Minnesota emerged with a 40-34 lead after shooting 64 percent.

Houston struggled to keep pace in the second quarter, and the Wolves led 68-49 at the half after closing on a 20-4 run.

Edwards and Towns combined for 29 points in the first half for Minnesota, which held the Rockets to 4-of-20 shooting in the second quarter.

Houston was without forwards Jabari Smith Jr. (illness) and Jae’Sean Tate, who missed his third straight game due to right ankle soreness.