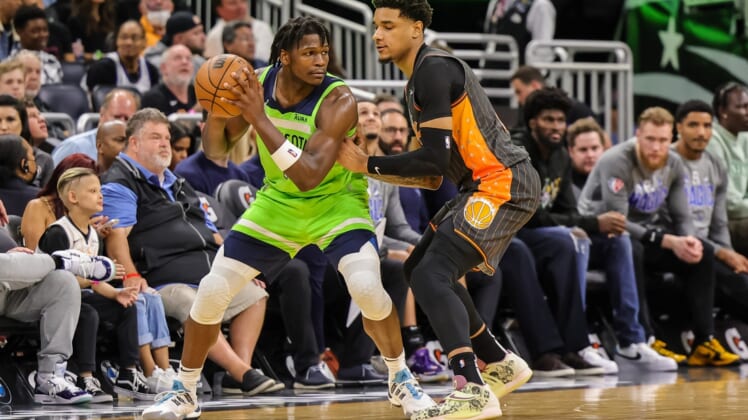 The Minnesota Timberwolves, who had their longest win streak since 2003-2004 snapped on Friday, are set to visit the surging Miami Heat on Saturday night.

Minnesota, which had been the hottest team in the Western Conference with six straight wins, lost to the host Orlando Magic, 118-110, on Friday.

Miami also played on Friday, defeating the visiting Cleveland Cavaliers, 117-105. The Heat have the best record in the Eastern Conference.

The Timberwolves have been getting healthier this week. Star starting shooting guard Anthony Edwards returned on Wednesday after missing four games due to a knee injury. He scored a game-high 25 points on Friday.

Another Wolves player to watch is Malik Beasley, who set a franchise single-game record with 11 3-pointers in Wednesday’s 132-102 win over the Oklahoma City Thunder.

“We have a great team,” Beasley said. “We have teammates who care about each other.”

Edwards, the NBA’s No. 1 pick in 2020, is second on the team in scoring (21.3). Edwards, 20, teams with Towns and guard D’Angelo Russell as Minnesota’s top three scoring options. Russell is averaging 19.0 points and a team-high 7.1 assists.

Towns is especially dangerous because he is shooting 58.2 percent on 2-pointers and a team-high 40.4 percent on 3-pointers.

Miami, meanwhile, got good news in Friday’s win as Jimmy Butler returned from a one-game sinus-issue absence. He had a big impact with 24 points, five assists, four rebounds and three steals against the Cavaliers. His 11 points in the key third quarter proved to be the difference in the game.

Miami also got a monster performance from Bam Adebayo, who had 30 points and 17 rebounds — both game highs.

Prior to the game, Caleb Martin — an explosive wing and a key member of Miami’s bench — worked out, attempting to return from a knee injury.

“It was encouraging,” Heat coach Erik Spoelstra said. “We will treat it as day-to-day.

“But considering how awkward the injury looked, this is great news.”

Spoelstra said that Heat guard Victor Oladipo — a two-time All-Star who has battled back from three years of injuries — will be rested on Saturday before playing again on Tuesday against the Detroit Pistons.

“I love where Vic is,” Spoelstra said. “But I’m looking at it much differently than everybody else. Everybody is asking: ‘What’s next? How’s it going to fit? How are we going to fast-track this?’

“The biggest win is Vic getting back out there. He’s healthy.”