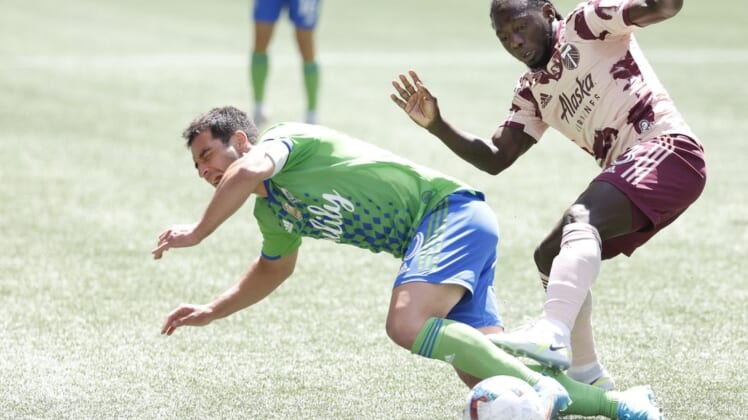 Jaroslaw Niezgoda had a goal and an assist as the Portland Timbers spoiled Seattle’s celebration of its CONCACAF Champions League title, defeating the host Sounders 3-0 Saturday afternoon during Major League Soccer’s Rivalry Week.

Santiago Moreno scored on a penalty kick in the 82nd minute and Dairon Asprilla clinched the victory with a goal on a counterattack three minutes later for the Timbers (6-6-8, 26 points), who extended their unbeaten streak to five matches (3-0-2).

The Sounders (8-8-2, 26 points) played with 10 men for nearly the entire second half. Rookie defender Jackson Ragen received a yellow card in first-half stoppage time, then was booked again less than 30 seconds after the intermission for a late sliding tackle on Eryk Williamson and was sent off, leaving the Sounders short-handed the rest of the way.

Despite the Sounders’ dominance in the first half, holding 63.2 percent of the possession and an 11-3 edge in shots, the Timbers got the lone goal.

It came on a counterattack, as Yimmi Chara worked the ball down the middle of the pitch before passing to Sebastian Blanco on the right wing. Blanco dribbled to the top corner of the 18-yard box before sending a cross to Niezgoda near the end line outside the far post. Niezgoda’s header from a sharp angle made its way just inside the left post.

The Sounders had several quality chances in the first half.

Ragen’s header off a corner kick in the 16th minute was cleared off the goal line by Claudio Bravo.

The Sounders appealed for a penalty kick late in the half when Lodeiro went down after a sliding tackle by Josecarlos Van Rankin, but no call was made.

And the Sounders’ Raul Ruidiaz, who returned after missing four games with a hamstring injury, hit the left post in the 45th minute.

Stefan Frei made five saves for Seattle, which dropped its second straight match at home.