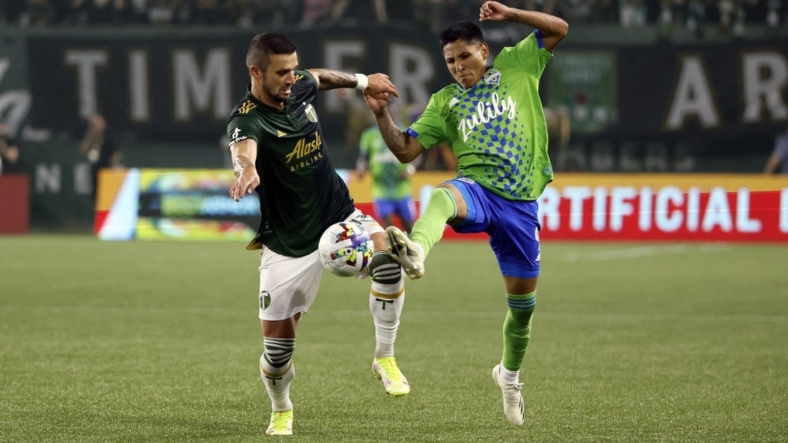 Dairon Asprilla and Sebastian Blanco scored on either side of halftime as the Portland Timbers rallied for a 2-1 victory over the visiting Seattle Sounders to move into a playoff position in the Western Conference.

Aljaz Ivacic made one save for the Timbers, who had lost their past two games, both on the road. It was the first time in the past six meetings of the Pacific Northwest rivals that the home team earned a victory.

The Timbers (8-8-12, 36 points) also clinched their first Cascadia Cup title since 2017. The regional trophy is contested yearly between the Timbers, Sounders and Vancouver Whitecaps. Seattle won the Cascadia Cup the previous three times it was contested.

Yeimar Gomez scored a goal for the Sounders (10-14-3, 33 points), whose winless streak was extended to four games. Stefan Frei had four saves for Seattle.

The Sounders struck first, taking a 1-0 lead in the eighth minute on a header from Gomez. Alex Roldan sent in a cross from the right side and Gomez rose above a Timbers defender to head the ball past Ivacic for his first of the season.

The Timbers got even when Asprilla scored on a penalty kick in the 41st minute. Gomez committed a foul against Portland’s Eryk Williamson in the penalty area to earn the try from the spot, and Asprilla delivered his sixth goal of the season.

The Timbers went in front in the 51st minute on Blanco’s seventh of the season. Williamson sent in a free kick over the Sounders’ defense with Asprilla redirecting the ball in front of the Seattle goal to a wide-open Blanco.

The Sounders had a chance to tie the game in the 85th minute, but Jackson Ragen’s header from in front of the Timbers goal rebounded off the crossbar.

With the defeat, the Sounders remained in 10th place in the West, with only the top seven teams advancing to the playoffs. The Sounders have made the playoffs in their 13 prior MLS seasons.

The Timbers moved past the Whitecaps and the Los Angeles Galaxy into seventh place.