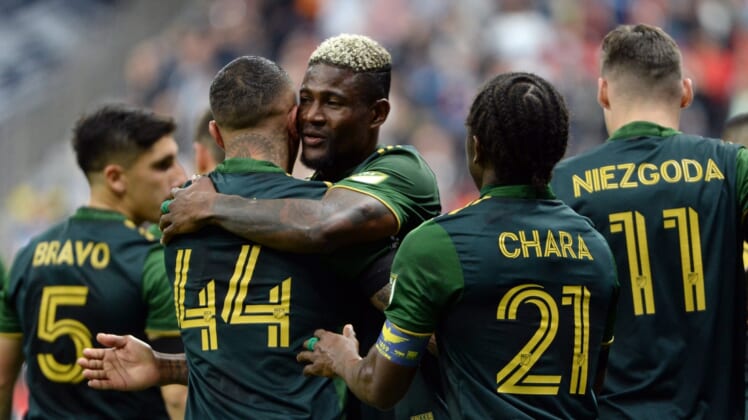 Jaroslaw Niezgoda and Yimmi Chara scored second-half goals and the Portland Timbers held on to defeat the host Vancouver Whitecaps 3-2 on Saturday night.

Dairon Asprilla converted a penalty kick late in the first half for the Timbers (2-2-3, 9 points), who snapped a three-game winless streak. Goalkeeper Aljaz Ivacic made five saves, all in the final 24 minutes, including one on a penalty kick.

Cristian Dajome and Ryan Gauld scored for the Whitecaps (1-4-1, 4 points) and Thomas Hasal made one save.

Asprilla’s penalty kick came in the 42nd minute after a video review determined the Timbers’ Marvin Loria was fouled by Dajome in the penalty area.

Loria got the ball at the left top corner of the 18-yard box and cut toward the middle, where he collided with Dajome near the penalty spot.

Referee Silviu Pestrescu originally allowed play to continue, but he was contacted by replay official Tim Ford at the next stoppage in play. After Petrescu took a look at the sideline monitor, he awarded the penalty.

Asprilla blasted the kick into the upper left corner of the net, just out of the reach of Hasal, who guessed the right way but had no chance to make the save.

Niezgoda made it 2-0 in the 60th minute, taking a pass on the left wing from Sebastian Blanco, beating a defender inside the penalty area and putting a shot from about 8 yards out high inside the near post.

The Whitecaps pulled within a goal in the 76th minute as Dajome took a pass from Deiber Caicedo and put a shot from 12 yards into the upper right corner of the net.

Chara restored the Timbers’ two-goal advantage just two minutes later, putting a shot from inside the 6-yard box into the upper part of the net.

Vancouver was awarded a penalty kick on video review in the 87th minute, but Ivacic made a diving stop on Dajome’s attempt.

The Whitecaps got another penalty kick, upheld by a video review, in second-half stoppage time, and Gauld converted to make it 3-2. However, Vancouver was unable to get the equalizer.