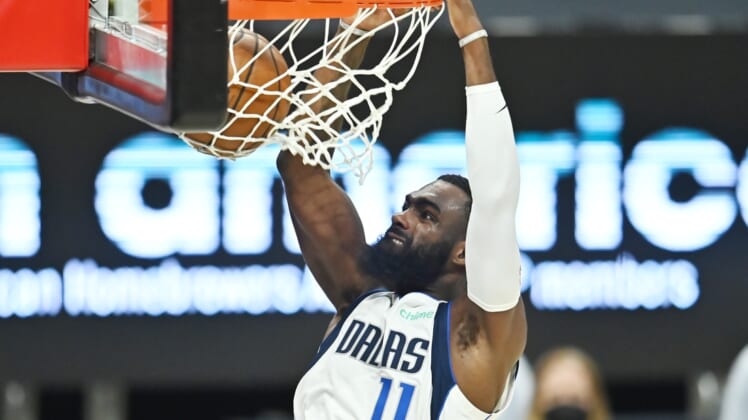 Tim Hardaway Jr. scored 25 points while hitting on 7 of his 11 3-point shots as the surging Dallas Mavericks defeated the host Cleveland Cavaliers 124-97 on Sunday in the second game of a home-and-home set between the two teams.

The Mavericks (40-28) won for the fourth straight game and are a season-best 12 games over .500. Dallas remained in fifth place in the Western Conference, moving a game in front of idle Portland in the standings with four games to play.

Josh Richardson added 20 points for the Mavericks, and Luka Doncic scored 15 before being ejected early in the third quarter. Jalen Brunson hit for 13 points and Dwight Powell tallied 12.

The Mavericks never trailed on Sunday, leading 39-30 after one quarter after being up by as many as 11 points midway through the period. Dallas built its advantage to 14 points in the second quarter before the Cavaliers fought back to within eight with 1:05 remaining in the half.

The Mavericks got late baskets from Hardaway and Richardson to push their lead back to 64-53 at intermission.

Four Dallas players scored in double figures in the half — Richardson with 16 points, Doncic with 15, Hardaway with 12 and Powell with 10 points. The Mavericks outshot Cleveland 56.5 percent to 40.8 percent in the half.

Sexton paced the Cavaliers with 12 points prior to intermission.

Doncic was ejected 1:55 into the third quarter for a flagrant 2 foul against the Cavaliers’ Collin Sexton during a scrum for a rebound. But the Mavericks never missed a beat, expanding their lead from 11 points when Doncic was tossed to 26 points, at 98-72, thanks to an 11-2 run to end the third period.

Dallas played without Kristaps Porzingis, who has missed six straight games and nine of the past 10 with a sore right knee, and Maxi Kleber, who didn’t play for a fourth consecutive contest because of a sore right Achilles.