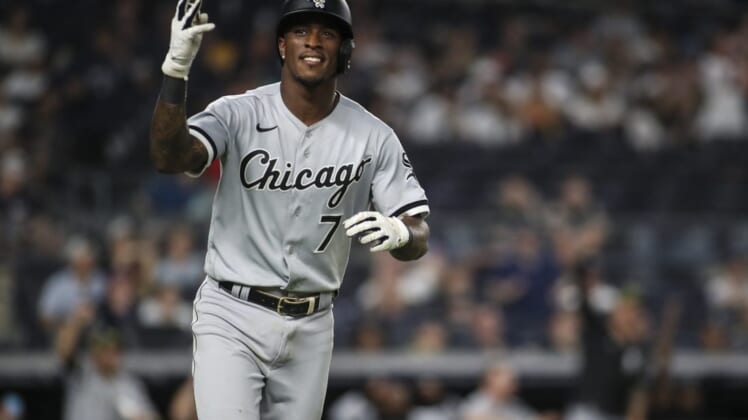 The Yankees’ Jonathan Loaisiga (1-2) relieved to begin the eighth inning and allowed singles to Jose Abreu and Gavin Sheets, sandwiched around a Yasmani Grandal strikeout. Leury Garcia lined out to shortstop, but both Andrew Vaughn and Reese McGuire followed with RBI singles off Loaisiga.

Anderson concluded the scoring surge with his three-run, opposite-field blast to right off reliever Miguel Castro, and then made a “shhhh” motion to the crowd with his index finger while rounding the bases.

That was because Anderson was booed each time he came to bat. Anderson’s ongoing feud with Yankees third baseman Josh Donaldson was re-ignited Saturday with a verbal altercation when Donaldson called him “Jackie,” as in Jackie Robinson, based on a 2019 magazine quote of Anderson’s. Anderson and the White Sox considered it racist and Donaldson subsequently apologized.

Donaldson sat out the nightcap after going 0-for-4 in the opener.

Kopech (1-1) threw 5 2/3 perfect innings before allowing a two-out double to Rob Brantly in the bottom of the sixth, but he got DJ LeMahieu on a fly ball to end the inning. Kopech lowered his ERA to 1.29. Matt Foster and Reynaldo Lopez each pitched a scoreless inning to finish the shutout.

Luis Severino pitched seven shutout innings for the Yankees despite allowing eight hits. He wriggled out of a bases-loaded, none-out jam in the fifth inning. Garcia led off with a single, Vaughn was hit by a pitch and McGuire followed with a bloop single to center. Garcia could have scored when center fielder Estevan Florial bobbled the ball, but Florial recovered in time to hold Garcia at third.

Anderson then grounded into a 5-2 force play, and Yoan Moncada hit into a 3-2 forceout, with first baseman Anthony Rizzo making the play despite being even with the bag. With the bases still loaded, Severino then struck out Luis Robert to end the inning.

The White Sox again came up empty in the sixth inning. This time, Abreu led off with a double to right-center. He advanced to third on a groundout by Grandal. But Severino struck out Sheets on a checked swing and retired Garcia on a fly to deep left-center.

Kopech issued two walks in the seventh, but fanned Florial to get out of the inning.

Chicago won the opener of the doubleheader, 3-1.