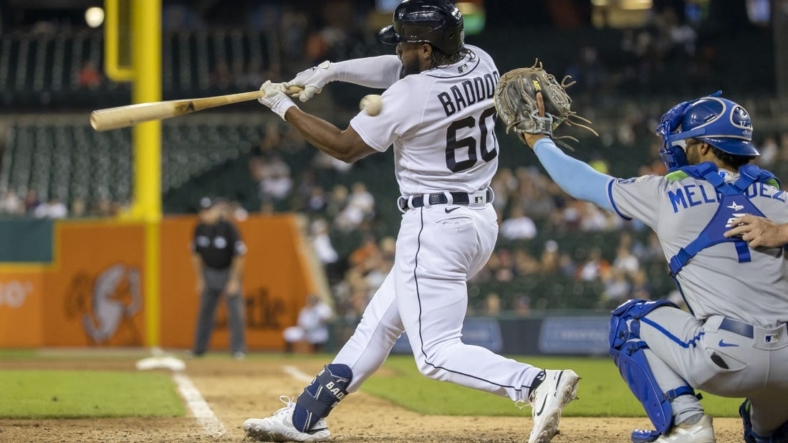 The Kansas City Royals and Detroit Tigers have featured two of the worst offenses in baseball this year, but Sunday could represent an opportunity for both to score runs when they conclude their three-game series.

The host Tigers will send out second-year right-hander Matt Manning (1-2, 3.79 ERA), who missed a majority of the season with bicep and shoulder injuries before returning in early August.

Manning had been pitching well for the Tigers since his return, allowing eight earned runs in 30 innings of work before his most recent start on Tuesday against Seattle.

However, that start was a different story.

Manning struggled mightily against the red-hot Mariners, allowing seven runs and seven hits before being removed after just 2 1/3 innings.

“He obviously wasn’t sharp,” Tigers manager A.J. Hinch said after Manning’s start. “He didn’t fastball command. He didn’t have the slider that he’s had in recent starts. He threw a couple of loose breaking balls that got hit. He gave up some two-strike hits. He was off from the get-go.”

Manning will attempt to rebound against a Kansas City offense that enters Sunday ranked No. 24 in the league in runs scored.

However, Kansas City’s offense is prolific compared to Detroit’s.

The Tigers are dead last in the majors in runs scored and are just one of five teams in the league that hasn’t reached the 500-run mark as a team. They’ve crossed the plate just 438 times in 133 games.

That might be good news for the Royals, who rank No. 27 in the majors in team ERA.

Kansas City will counter Manning with right-hander Max Castillo (0-1, 2.81), who wasn’t announced as the team’s starter until Saturday.

Castillo, who was a part of the trade on Aug. 2 that sent Whit Merrifield to Toronto, rejoins the Royals after being sent down to the minors on Aug. 20.

In total, Castillo has made 10 appearances this year, three of which were starts, and has thrown 25 2/3 innings.

In his only previous appearance for the Royals this season on Aug. 18 against Tampa Bay, Castillo allowed three hits and one earned run in five innings.

Kansas City got some good news before Saturday’s game in that X-rays were negative on catcher Salvador Perez’s hand after he was struck by a pitch during Friday’s game.

Perez left that contest after getting hit and wasn’t in Saturday’s lineup, but he could be back on Sunday.

“He’s sore and swollen,” Royals manager Mike Matheny said. “We’re just happy to get the negative X-ray back more than anything else.”

Kansas City earned a 12-2 win on Saturday to even the three-game series at a game apiece.

The game on Sunday will wrap up the fourth of six series’ between the teams this year.

The Tigers will play a three-game series in Kansas City from Sept. 9-11 and then host the Royals for the final series of the season between the teams from Sept. 27-29.

Kansas City has won seven of the 12 games between the two teams this season.