Tigers, Royals hope to get game in before rain arrives 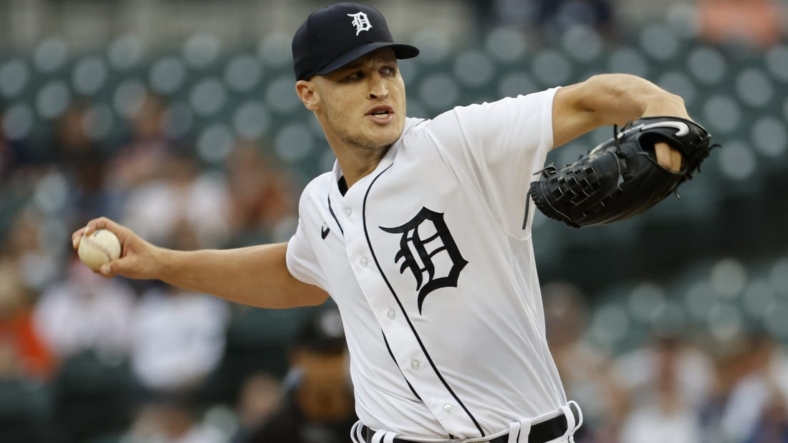 The visiting Detroit Tigers and the Kansas City Royals will get to work earlier than expected on Saturday.

The teams were slated to start the middle game of a three-game series at 6:10 p.m. CT, but with the forecast indicating rain will arrive in the evening, the game was moved up to a 3:10 p.m. CT first pitch.

Detroit cruised to a 10-2 win on Friday in the series opener. Joey Wentz, who grew up in the Kansas City area, recorded his first major league victory with 6 2/3 scoreless innings.

Manning missed more than half of the season due to a shoulder injury. He returned in early August and has been either very good or very bad. In three of his starts, he has pitched at least six innings and allowed one or no runs. In his other four outings, he gave up a total of 16 runs in 16 1/3 innings.

“I don’t think the shape (of my slider) was as consistent as it usually is,” Manning said after allowing seven runs on seven hits in 2 1/3 innings against the Mariners on Aug. 30. “I wasn’t getting enough movement on it, and I think I just threw some over the plate too much. It’s just one of those things where it got a little flat.

“They weren’t bad sliders by any means, but it just caught too much plate.”

Manning made his most recent start on Sunday against the Royals, when he allowed two runs on five hits in four innings. He faced Kansas City for the first time on April 16, and he yielded a run on two hits before exiting due to the shoulder ailment that landed him on the injured list.

Heasley is 1-0 with a 1.46 ERA in two career starts against the Tigers, including in his latest outing on Sept. 3 when he allowed two runs on eight hits in seven innings.

One Royals newcomer in the spotlight is outfielder Drew Waters. The Georgia native was selected by the Atlanta Braves in the second round of the 2017 draft. He was dealt to the Royals, along with two other minor-leaguers, in July in exchange for the No. 35 overall pick in this year’s draft. Before the trade, he was considered Atlanta’s top prospect.

“We had heard five tools,” Royals manager Mike Matheny said of Waters’ skillset. “That doesn’t get thrown around very often. We were waiting to see how that played in a game. I’m surprised how well he attacks the ball. We’ve seen it a couple of times. He reminds me of Gordo (eight-time Gold Glove winner Alex Gordon).”

Waters has played in every game with the Royals since his debut Aug. 22. He has appeared at all three outfield positions, with the bulk of his starts coming in right field. He has yet to make an error after 34 chances.

Matheny is not the only one who has noticed. Cleveland manager Terry Francona, whose club played a three-game series in Kansas City earlier this week, said, “There’s a lot of athleticism on that (Royals) roster. The kid who came over from Atlanta, Waters, kind of ‘tooled out.’ He’s just got to make sure he can hit.”

Waters went 0-for-3 with a walk on Friday, dropping his average to .196. He has one homer and five RBIs through 46 at-bats.