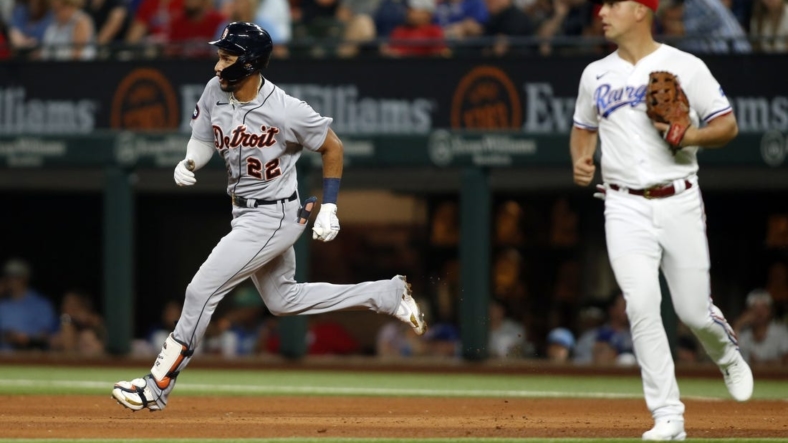 Rodriguez (3-3) allowed one run and six hits in six innings. It was his first game back from a long absence from the club. He last pitched on May 18.

Texas starter Dallas Keuchel (2-8) gave up seven runs and 11 hits in 5 1/3 innings. Adolis Garcia had a solo homer and Nathaniel Lowe added two hits and drove in a run.

Detroit jumped to a 2-0 lead in the first. Reyes sparked it with a one-out double. Baez smacked an RBI single and advanced on the throw home. He moved to third on a groundout and scored on Willi Castro’s RBI single.

Texas got one of those runs back in the bottom of the inning. Marcus Semien and Corey Seager walked before Lowe ripped a run-scoring single.

Detroit scored two more runs in the second. Barnhart led off with an infield single and moved to third on Riley Greene’s double. Reyes brought home Barnhart with a sacrifice fly and Greene scored when shortstop Seager made a throwing error on a Baez grounder.

The Tigers made it 5-1 in the fifth. Reyes led off with a double, advanced on Baez’s grounder and scored on Haase’s sacrifice fly.

Detroit extended its lead to six runs in the sixth. Harold Castro led off with an infield single and Candelario pounded a cutter from Keuchel over the center field fence.

After Rodriguez departed, Will Vest struck out the side in the bottom of the seventh.

Candelario scored again in the eighth. He led off with a double, moved to third on a single and scored on Zack Short’s sacrifice fly.

Garcia homered off Daniel Norris in the bottom of the inning.