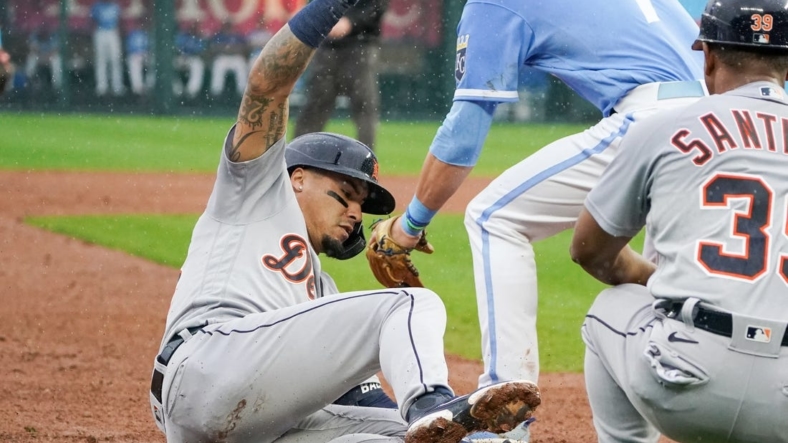 Victor Reyes was 2-for-4 with three RBIs as the Detroit Tigers defeated the Royals 8-4 Saturday in Kansas City. The game was called after seven-and-a-half innings because of rain.

Detroit’s second-, third- and fourth-place hitters combined to go 6-for-12 with seven RBI

Matt Manning (2-2) had little trouble with the Royals. He allowed three runs (two earned) on three hits over 6 1/3 innings. Throwing a slippery baseball, he only walked one and struck out four.

The Tigers pounded the Royals behind a rookie starter for the second straight night. They defeated Kansas City 10-2 Friday night behind Kansas City-area native Joey Wentz.

Jonathan Heasley (3-8) allowed seven runs on seven hits in four-plus innings. The Royals have lost seven of their last 10 games.

Salvador Perez lined a one-out single in the first to score Bobby Witt Jr. with the first run.

Kerry Carpenter tied the game in the top of the inning with a solo home run. The Tigers have eight home runs in their last three games after hitting just four in their previous eight games.

Reyes tripled off the wall in right, scoring Akil Baddoo with the go-ahead run in the third. Javier Baez doubled on the next pitch scoring Reyes and Baez scored on a single by Harold Castro.

Heasley ran into more trouble in the fifth. He walked Baddoo leading off and then gave up back-to-back hits by Riley Greene and Reyes, scoring both runners and ending Heasley’s day. Baez greeted reliever Collin Snyder with a triple, scoring Reyes. Baez scored on a single by Castro.

The Royals scored a pair of unearned runs in the seventh, but left two runners on base.