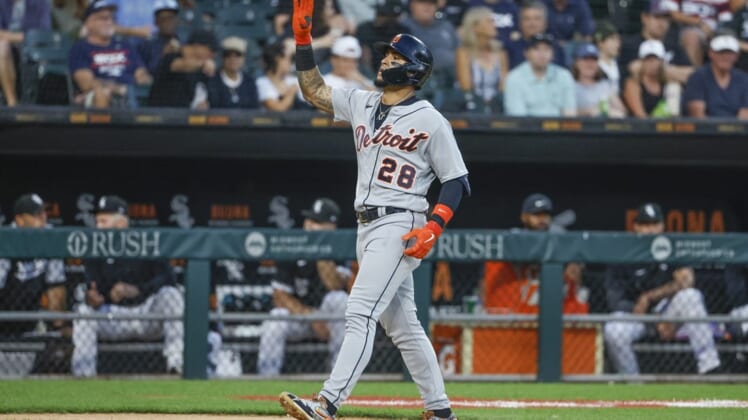 Detroit Tigers shortstop Javier Baez has emerged as the center of attention for this weekend’s four-game series against the host Chicago White Sox. That trend figures to continue when the teams meet again on Saturday.

Playing his first games in Chicago since the crosstown Cubs traded him to the New York Mets last July, Baez has responded to the frequent boos with several timely hits.

Baez delivered a key two-run double in Detroit’s 7-5 victory on Friday as the Tigers extended their winning streak to a season-best six games.

“His ability to thrive in those moments is very unique,” Detroit manager A.J. Hinch said. “Most people don’t love that environment because it can get a little intimidating, but Javy loves the big moment. He loves playing on the road when the fans boo him.”

While the Tigers have started July on a high note, Chicago has lost four of five overall and in addition to dropping eight of its past 10 home games.

White Sox first baseman Jose Abreu extended his hitting streak to 13 games on Friday and is batting .434 (23-for-53) over that stretch.

Abreu is also a candidate to join teammate Tim Anderson at the All-Star Game on July 19 at Dodger Stadium in Los Angeles.

Anderson, 29, was voted in as the AL starting shortstop on Friday in the final All-Star voting to name starters at each position. The leadoff hitter is batting .316 with 10 stolen bases and 35 runs.

“Just to see, from the time I jumped into this organization, to see where I’m at now, it’s been great,” Anderson said. “I’ve been thankful, I’ve been blessed to get into this position.”

Chicago will send veteran right-hander Johnny Cueto (2-4, 3.30 ERA) to the mound on Saturday. He received a no-decision after allowing two runs over six innings against the Minnesota Twins on Monday.

Cueto, 36, signed a minor league contract with the White Sox in early April and has settled in as a key starter with his new club. He owns a 48-to-18 strikeout-to-walk ratio in 10 games (nine starts).

“I feel happy with how my season has been going,” Cueto said. “I’ve been able to pitch well, to help the team. And I feel good.”

The Tigers will counter with right-hander Garrett Hill (1-0, 1.50 ERA) after the rookie impressed in his major league debut on Monday.

Hill, 26, yielded one run on two hits over six innings in a 4-1 victory over the Cleveland Guardians during the first game of a doubleheader. He became the first Tigers pitcher to allow two or fewer hits in his major league debut in six innings or more.

“He handled himself so well,” Detroit catcher Tucker Barnhart said. “It was extremely impressive to watch him work. He seemed very stoic, and he threw a lot of strikes. He did exactly what we talked about, pitched to contact. He threw all his pitches in the zone for strikes.”