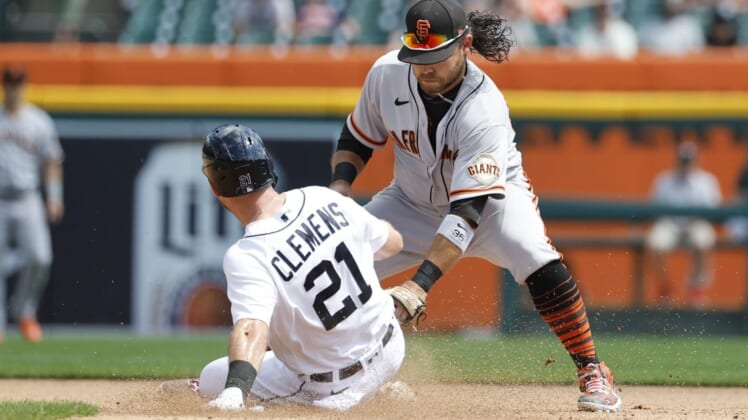 Matt Manning tossed six scoreless innings for his first win of the season and Detroit scored six two-out runs in the fifth as the Tigers defeated the visiting San Francisco Giants 6-1 on Wednesday afternoon.

Manning (1-1) gave up five hits, didn’t issue a walk and struck out eight. Victor Reyes and Willi Castro drove in two runs apiece during the fifth-inning outburst, while Kody Clemens and Harold Castro each scored and knocked in a run.

Detroit has won three of its last four games.

Tommy La Stella had two hits and drove in the lone San Francisco run. Giants starter Logan Webb (11-7) was charged with all six runs on five hits in 4 2/3 innings.

The Giants left 10 runners on base and went 1-for-13 with runners in scoring position.

San Francisco left two runners stranded in the third. Joey Bart reached third base with two out in the third but Manning retired Wilmer Flores on a comebacker.

It was much the same in the fourth. Joc Pederson doubled to lead off the inning and moved to third on a long fly ball with two out. Manning then struck out Thairo Estrada to end that threat.

Keeping with that theme, Mike Yastrzemski led off the fifth with a single, stole second and advanced to third on a groundout before Manning set down LaMonte Wade Jr. on a flyout.

Consecutive two-out singles by Yastrzemski, Bart and La Stella against Will Vest allowed San Francisco to push across a run in the seventh.

The Giants had two more baserunners in the eighth but Alex Lange struck out the next two hitters to preserve the five-run advantage.