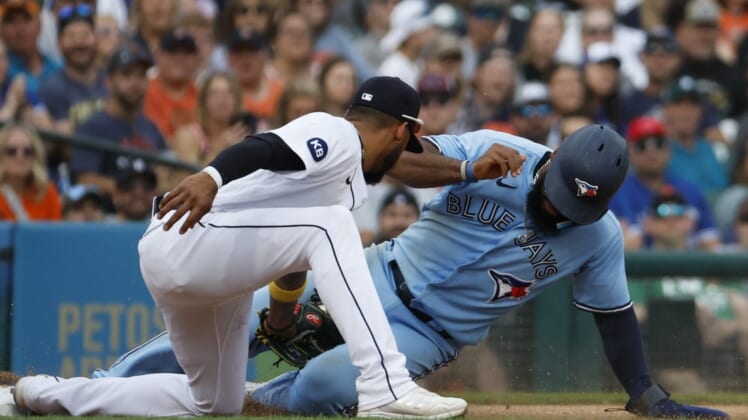 Brieske (1-5) gave up seven hits and didn’t issue a walk in 5 2/3 innings. Gregory Soto notched his 13th save while surviving a ninth-inning jam.

Toronto catcher Gabriel Moreno, called up from Triple-A Buffalo on Saturday, went 1-for-4 in his major league debut. Moreno is considered the team’s top prospect. George Springer ended Detroit’s shutout bid with a two-out single in the ninth.

Detroit grabbed a 1-0 lead in the first.

Reyes led off with a single and reached second when shortstop Bo Bichette dropped a throw on a steal attempt. Austin Meadows drew a one-out walk and Harold Castro bounced a two-out single through the middle to drive in Reyes. Another walk loaded the bases before Gausman retired Willi Castro on a flyout.

Bichette and Vladimir Guerrero Jr. had two-out singles in the third but Teoscar Hernandez lined out to shortstop Javier Baez.

The Tigers scored another run in the fourth. Baez led off with a walk and moved to second on Spencer Torkelson’s groundout. Haase then ripped a two-out triple, the second three-bagger of his career.

Hernandez reached on a Baez error leading off the sixth. One out later, Hernandez was thrown out by left fielder Willi Castro as he attempted to reach third on Lourdes Gurriel Jr.’s single.

The Tigers had runners in scoring position with one out in the bottom of the inning on Baez’s single and Willi Castro’s double. Baez was doubled off third on Torkelson’s lineout to second baseman Cavan Biggio.

Detroit made it 3-0 in the seventh when Haase led off with a double and scored on Reyes’ single.