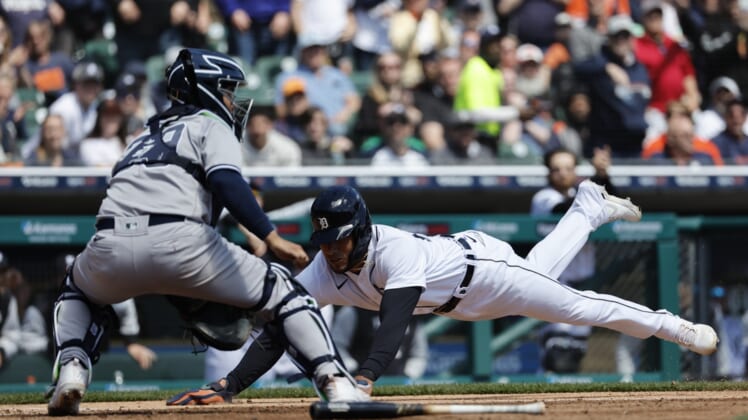 While Miguel Cabrera remained one hit shy of 3,000 for his career, while Michael Pineda won his Detroit debut as the Tigers downed the visiting New York Yankees 3-0 on Thursday afternoon.

Cabrera was 0-for-3 before he was intentionally walked in the eighth inning.

Pineda, signed as a free agent during spring training, gave up three hits in five scoreless innings, while throwing 60 pitches. Gregory Soto notched a five-out save, his third, in Detroit’s first shutout this season.

Robbie Grossman had three hits, scored a run and drove in another, while Austin Meadows added a two-run double.

Yankees starter Jordan Montgomery (0-1) gave up one run on three hits in six innings with two walks and five strikeouts.

Detroit scored its opening run in the third inning. Willi Castro led off with a single, moved up on a grounder, and scored on Grossman’s double to left.

Cabrera flew out to left field with a runner on second base in the first inning, before he struck out in the fourth and sixth innings.

Pineda allowed just one baserunner until DJ LeMahieu led off the fifth with a single. Isiah Kiner-Falefa singled with one out to put runners on the corners, but the next two batters flied out to leave them stranded.

The Yankees threatened in the eighth.

Josh Donaldson led off with a double against Alex Lange. Pinch-hitter Gleyber Torres followed with an infield single to move pinch-runner Tim Locastro to third.

After a pop out, Lange walked Judge. Gregory Soto replaced Lange and induced a soft tapper from Anthony Rizzo. Soto threw Locastro out at home, then retired Giancarlo Stanton on a groundout to escape the jam.

With the Tigers leading 1-0 in the eighth, Victor Reyes doubled in the bottom of the inning against Miguel Castro and moved to third on Grossman’s infield hit. Jonathan Schoop walked to load the bases.

Lucas Luetge replaced Castro and induced Jeimer Candelario to hit into a 1-2-3 double play. The Yankees then elected to walk Cabrera, drawing boos from the home crowd. Meadows followed with a bloop hit that dropped into short center, allowing two runs to score.