Tigers bank on another strong effort from Matt Manning vs. Giants 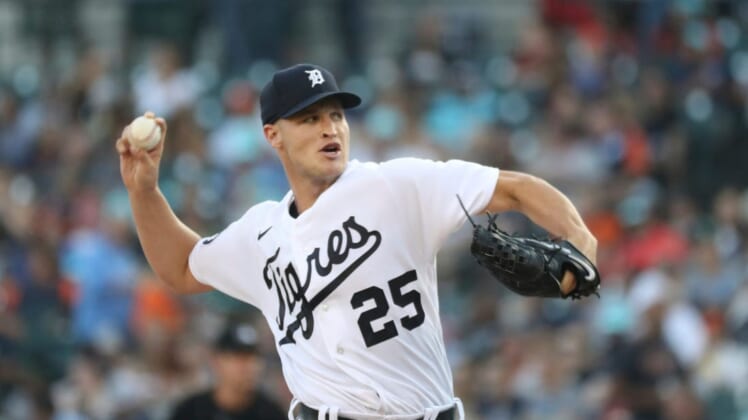 Matt Manning has made an impressive return to action this month. The only thing missing has been run support.

The Detroit Tigers right-hander will make his fifth August start when the team closes out a two-game home series against the San Francisco Giants on Wednesday afternoon.

Manning was sidelined for 3 1/2 months due to a shoulder injury. He returned on Aug. 2, when he gave up three runs in five innings against the Minnesota Twins.

That was followed by a dominant performance against the Tampa Bay Rays, as he tossed seven scoreless innings and struck out seven. The Tigers were blanked that game.

He allowed four runs in five innings to the Chicago White Sox before another powerful outing. Manning (0-1, 2.81 ERA) allowed only one run and four baserunners in seven innings against the Los Angeles Angels on Friday yet wound up the hard-luck loser as Detroit was shut out once again.

“Matt Manning is a legitimate big-league pitcher and we’re seeing it showcased right now,” Tigers manager A.J. Hinch said. “What he’s doing now and how he finished last year speaks for itself. (Friday) he was electric. His stuff was good across the board.”

Manning set down 13 of the last 14 batters he faced.

“I wanted to go back out for the eighth but coming off the injury, I’m just glad to get as many innings as I can under my belt,” he said.

The 24-year-old, who made his debut last season, has established himself as a fixture for future seasons.

“It was just nice to see him go into attack mode,” Hinch said. “That was impressive stuff. He’s someone we’re building around.”

Manning will oppose Giants right-hander Logan Webb (11-6, 3.08 ERA), who struggled in his last outing following two quality starts. He gave up five runs (three earned) and nine hits in 4 2/3 innings against the Arizona Diamondbacks on Thursday.

“I feel good, and that’s the most frustrating thing,” Webb said. “(Thursday) was probably the best I’ve felt in a good month, and I kind of (stunk).”

Webb failed to record a strikeout for the first time in 70 career starts.

“The stuff wasn’t great, but I thought I was competing,” Webb said. “They’ve got a sneaky good lineup, honestly. Lowest in chase rate in baseball. I’ve got to figure something out against them.”

Webb will face Detroit for the first time, just as Manning will be making his first start against San Francisco.

The Giants got another big hit from Evan Longoria while defeating the Tigers 3-1 on Tuesday. Longoria blasted a two-run homer in the sixth, which proved to be the margin of victory. Longoria hit a grand slam against the Colorado Rockies on Sunday as the Giants snapped a four-game losing streak with an 11-inning victory.

Longoria has produced three multi-hit games in the last four games, raising his season average to .264.

The Tigers will finish a five-game homestand on Wednesday. They won two of three against the Angels over the weekend.

Detroit batters struck out 13 times on Tuesday and left the bases loaded in the ninth.

“A lot of swing and miss today, which is tough,” Hinch said. “You’ve got to put the ball in play and you’ve got to keep fighting, and we did. I thought we had nice at-bats as the game went on.”