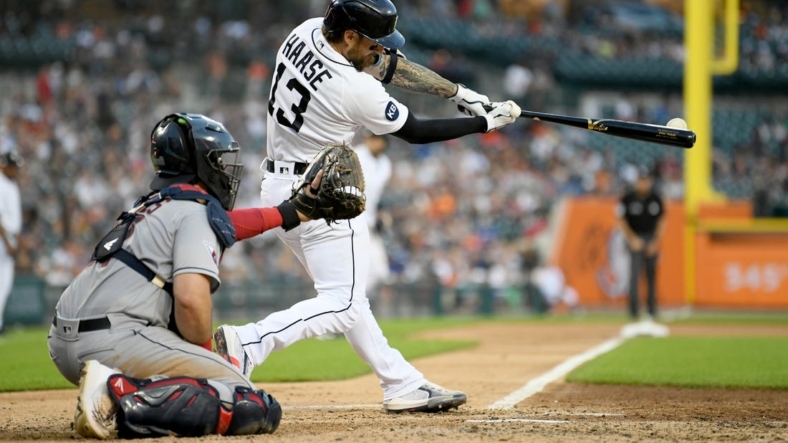 The Detroit Tigers’ offense finally is showing signs of life.

The lowest-scoring team in the majors has six or more runs in three straight games for the first time this season, and the Tigers will try to stay in the groove during the finale of a three-game series against the Texas Rangers on Sunday in Arlington, Texas.

Detroit rolled to an 11-2 victory on Saturday night, pounding out 18 hits. Eric Haase and Jeimer Candelario each slammed two-run homers and drove in three runs apiece.

Leadoff hitter Riley Greene carries a six-game hitting streak into Sunday’s game. He has five hits, four runs scored and four RBIs in the first two games of the series.

“A lot to like,” Tigers manager A.J. Hinch said. “Obviously, offensively that was a long time coming and we put up some really good at bats. A lot of guys had big nights, which is fun for everybody.”

Right-hander Drew Hutchison (1-7, 4.06 ERA) will start the series finale for Detroit. In each of his last two starts, he has given up one run in five innings. Despite that, he was charged with the loss against San Francisco on Tuesday.

Hutchison’s lone victory came against Cleveland on July 5. Like many of the Tigers’ starters, Hutchison has been affected by a lack of run support. The Tigers have scored just nine runs in his last five starts.

Hutchison faced Texas on June 19 and got a no-decision while allowing three runs in 4 2/3 innings. He’s 2-0 with a 2.84 ERA in four career starts against the Rangers.

A rash of pitching injuries has allowed Hutchison to become a regular in the rotation.

“If I didn’t think I could pitch, I’d be playing golf every day or doing something different. But for me, it was just trying to position myself to get an opportunity somewhere,” Hutchison told the Detroit News. “It gets harder and harder. Thankfully, I was able to get here.”

He’ll be opposed by another right-hander, Kohei Arihara (1-1, 2.31 ERA), who will make his third major league start this season. Arihara held Minnesota scoreless in six innings last Sunday in a 7-0 victory. He gave up just four hits and didn’t issue a walk.

“He set the tone, he kept (them) at bay,” Rangers interim manager Tony Beasley said. “If he comes out and doesn’t pitch well, none of this offense matters. He kept the game at a spot where we had a chance to get going offensively. There was not much happening early in the ballgame on either side.”

Arihara had a 3-6 record with a 4.88 ERA in 18 games, including 14 starts, with Triple-A Round Rock. He gave up three runs in 5 2/3 innings to Oakland in his first major league outing this season.

“I was definitely more settled in this time,” he said through an interpreter. “I was a lot more relaxed and got into a rhythm quickly. … I had a lot of quick outs here and there, and my defense behind me did a fantastic job, so I was able to get a good outing.”

The loss on Saturday was the first time Texas pitchers had given up double digits in runs since July 12.