Tiger Woods is set to make his second appearance on the PGA Tour of the season this week during the 2022 PGA Championship.

For the all-time great golfer, it’s been a hell of a road back from the serious injuries he suffered in an automobile accident back in February of 2021.

Woods’ first PGA-sanctioned tournament came earlier in the spring when he made the cut in the 2022 Masters — only to fall off big time during the weekend.

Set to tee off Thurday at the Southern Hills Country Club in Tulsa, Oklahoma, Tiger Woods is not one of the betting favorites to come away with what would be a his record-tying fifth PGA Championship. That has not stopped one bettor from laying down a whole bunch of cash in hopes that the 46-year-old Woods shocks the golf world.

According to Caesars Sportsbook, an unnamed individual in Nevada bet $20,000 that Woods will win in Oklahoma this weekend. He’s currently at 60-to-1 odds — meaning the pay out would be a cool $1.2 million.

We wouldn’t put it past Woods to be competitive during the second Major on the tour this season. He’s shown up big time in situations like this in the past.

Most recently, Woods’ win over Dustin Johnson and Brooks Koepka in the 2019 Masters sent the sports world into a frenzy. He came in at 14-to-1 odds heading into that event. This tells us just how much of a long shot Woods is in 2022.

Right now, most of the bets coming in are landing in the direction of 2022 Masters winner Scottie Scheffler. 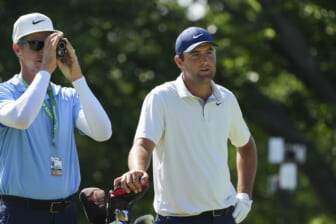 Can Tiger Woods shock the field at the 2022 PGA Championship

Woods’ performance in the Masters earlier this spring was pretty much a test run. He did not have the strength behind him after having not appeared in a PGA-sanctioned tournament since all the way back in November of 2021. All said, Woods has appeared in all of four tournaments since October of 2020.

A four-time winner of the PGA Championship, Woods has not hoisted the Wanamaker trophy since back in 2007. If he comes out on top here, the all-time great will join Walter Hagen (match play) and Jack Nicklaus (stroke play) with five PGA Championship wins.

For golf fans it’s going to be fun with the PGA opting for a dream group of Jordan Spieth, Rory McIlroy and Tiger Woods to open things up Thursday.