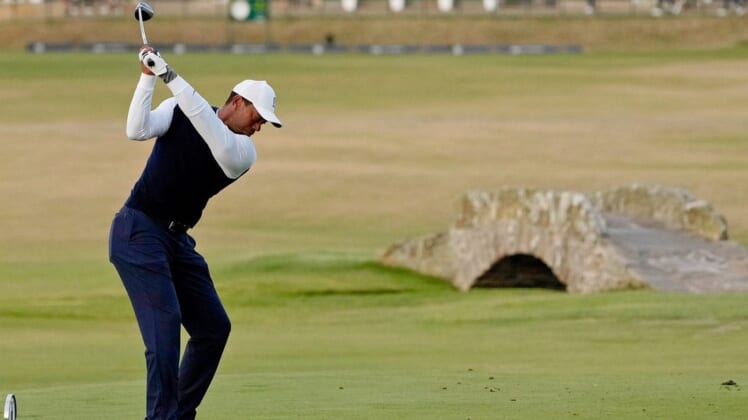 Tiger Woods will miss the cut at The Open Championship for just the fourth time in his career after carding a 3-over-par 75 in Friday’s second round at St. Andrews in Scotland.

Following Thursday’s 78, Woods stood at 9 over, far off the projected cut line of even par. The top 70 golfers and ties will make it to the weekend; Woods was tied for 150th out of 156 golfers when he walked off the course.

He missed a cut for the first time since his return to competitive golf following a car accident in February 2021 that left his right leg and foot badly injured.

The question turned to whether Woods, 46, would be able to play another Open Championship at St. Andrews, where he won in 2000 and 2005. It’s likely to be several years before the major returns to the birthplace of golf as part of the rotation of Open courses.

Woods made his return at the Masters in April, reached the weekend there and finished 47th. At the PGA Championship the next month, he made the cut but withdrew after the third round due to ongoing pain in his leg and foot.

Woods skipped the U.S. Open so he could physically recover in time to play the 150th Open at the course he said is his favorite in the world.

Woods made his only birdie of the day at the par-4 third hole by draining a 28-foot putt. But he lipped out his par putt at the fourth, bogeyed again at the sixth and was stuck in neutral the rest of the way.

At the par-5 14th hole, his second shot landed in a hazard known as the “Hell Bunker.” He escaped it and landed his shot 14 feet from the pin, but his birdie try lipped out.

His worst hole was the par-4 16th, following nine straight pars. His third shot came up well short of the green and fell into a bunker, and he would two-putt for double bogey.

Woods had a chance to go out with a fist pump with a short birdie try at the 18th green, but he watched as yet another putt lipped out. He shook his head as he tapped in the par before waving to the crowd.

Star Rory McIlroy of Northern Ireland was heading up the first hole, parallel to the 18th, as Woods walked up the last fairway. McIlroy was seen giving Woods a tip of his cap.

“The warmth and the ovation at 18, it got to me,” Woods said. “Just the walk. I felt the guys there stop there off the tee at 18. It was just incredible, the amount of understanding and respect that are involved in this event.”