Tiger, Charlie Woods to team up in PNC Championship 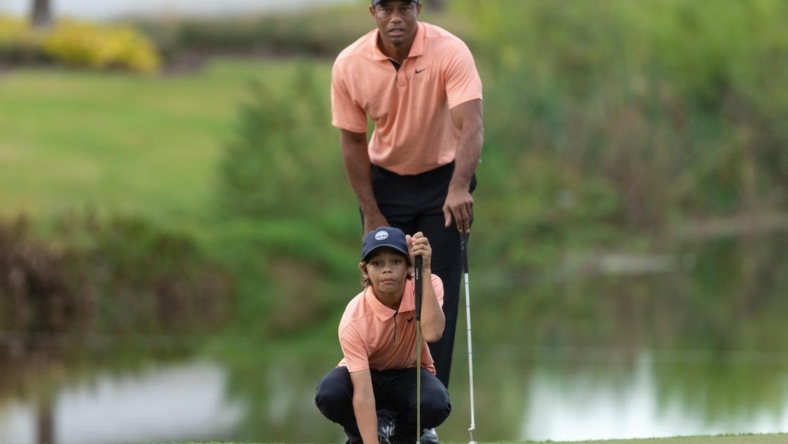 Tiger Woods and his teenage son, Charlie, will compete next month at the PNC Championship, marking their third appearance in the tournament.

The event, to be held Dec. 15-18 at The Ritz-Carlton Golf Club Orlando, is for reigning and past winners of either a major or The Players championship and a family member. The Woods pairing finished in second place last December, two shots behind John Daly and his son, John Daly II.

Team Woods rattled off 11 birdies in a row to set the longest birdie streak in the history of the tournament.

In all, 20 men and women who won a combined 73 major titles will compete in the tournament. Among those in the field are nine-time major winner Gary Player with grandson Jordan; 10-time major winner Annika Sorenstam with her 11-year-old son, Will McGee; and six-time major champion Nick Faldo with son Matthew.

The Dalys are scheduled to be there to defend their title and compete in the two-day, 36-hole scramble for a share of the total purse of $1,085,000.

“We have been looking forward to this week all year and we can’t wait to team up together for our third PNC Championship,” Tiger Woods said in a news release. “This is such a special opportunity as a dad to get to compete with my son against so many golfing greats and their family members. It is going to be a very special week and I know that Charlie and I will have a blast.”

Charlie, 13, has absorbed the teachings of his father, an 82-time PGA Tour winner and 15-time major champion. The teenager shot a personal low round of 68 in September during the final round of the Notah Begay III Junior National Golf Championship at Mission Inn Resort in Howey-in-the-Hills, Fla. His father caddied for him that day.

Tiger Woods, 46, returned to competitive golf at the 2021 PNC Championship, just 10 months following a serious car crash. He played a limited 2022 schedule but is preparing to play next week in the Hero World Challenge. He has hosted the event, to be played at Albany Golf Club in the Bahamas, since 2000.