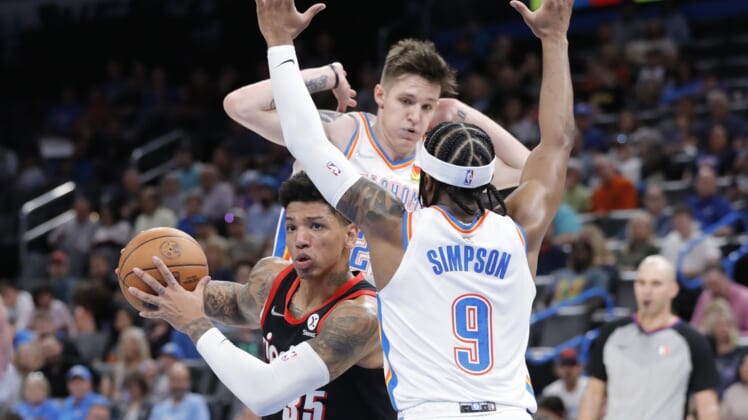 Jaylen Hoard scored a career-high 24 points and tied a career high with 20 rebounds to lead the Oklahoma City Thunder to a 98-94 home win over the Portland Trail Blazers on Tuesday.

The Thunder (24-55) have won back-to-back games, narrowing their chances of earning one of the bottom three spots in the NBA overall standings, and the enhanced chances in the draft lottery that comes with that finish.

But in the three games since being added to the Thunder on a 10-day contract via the hardship exemption, Hoard has recorded two 20-rebound games.

Hoard was joined Tuesday by two other former Oklahoma City Blue teammates, Georgios Kalaitzakis and Zavier Simpson. Kalaitzakis and Simpson were added earlier in the day on similar deals to the one that brought in Hoard.

It was Simpson’s NBA debut, while Kalaitzakis played nine games for the Milwaukee Bucks earlier this season.

The Blazers led by 18 with 10 minutes left before Oklahoma City made its push, outscoring Portland 26-4 the rest of the way.

The Thunder took their first lead since the opening moments of the second quarter on Simpson’s driving reverse layup with just less than four minutes to go.

Hoard was 11 of 17 from the floor. Isaiah Roby added 18 points and Kalaitzakis 17 points for the Thunder.

Aleksej Pokusevski, Theo Maledon, Jeremiah Robinson-Earl and Aaron Wiggins were all available for the Thunder but did not play.
Lindy Waters III came off the bench for the final 4:26 of the first quarter, scoring eight quick points, and didn’t return.