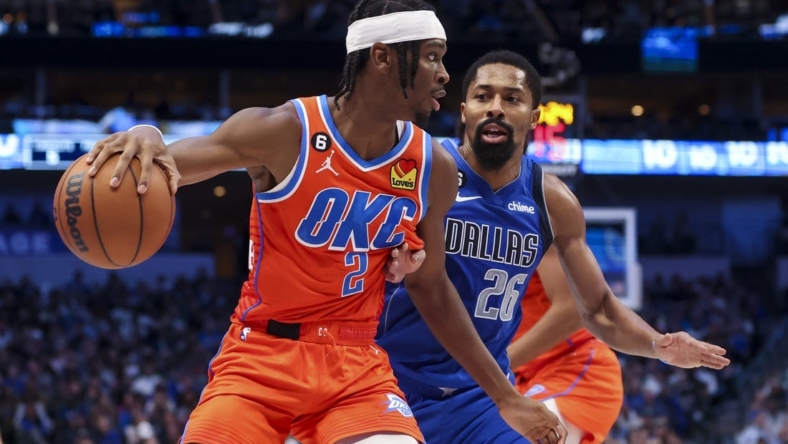 Shai Gilgeous-Alexander scored 38 points to lift the Oklahoma City Thunder to a 117-111 overtime win over the Dallas Mavericks on Saturday in Dallas.

It looked like their winning streak was going to end, though, before Isaiah Joe entered the game late in regulation.

Joe hadn’t played until coming off the bench with less than five minutes remaining. He quickly gave Oklahoma City’s offense a spark with seven points, a rebound and an assist as the Thunder closed regulation with an 18-2 run to force overtime.

With less than 20 seconds remaining, Gilgeous-Alexander grabbed a rebound and headed the other way, driving in the top of the lane before flipping the ball backward to Joe, who drilled the 3-pointer to tie the game.

Joe hit two more 3-pointers in overtime to help the Thunder pull away.

Before Saturday’s game, Joe had played just six minutes this season, missing both of his 3-point attempts. Joe finished with 15 points, hitting all three of his 3-point tries. Until he got hot from outside, the Thunder were scuffling.

Gilgeous-Alexander was 15 of 27 from the field for a season-high in scoring. Luguentz Dort added 16 points and Darius Bazley scored 15 off the bench to help Oklahoma City.

Luka Doncic had his second consecutive triple-double for the Mavericks, leading them with 31 points, 16 rebounds and 10 assists. Doncic was just 8 of 23 from the floor, though, missing all six of his 3-pointers.

Dallas shot just 20 percent (8 of 40) from beyond the arc. Spencer Dinwiddie added 20 points for the Mavericks.

With the Mavericks on the first night of a back-to-back, and the game seemingly in hand midway through the fourth, it seemed as though Doncic might not get a chance at the triple-double.

But Dallas’ star came back in, needing one assist to reach the mark.

The Mavericks shot just 1 of 10 the rest of regulation, though, and it wasn’t until overtime that Doncic sealed the triple-double as the Thunder came storming back.