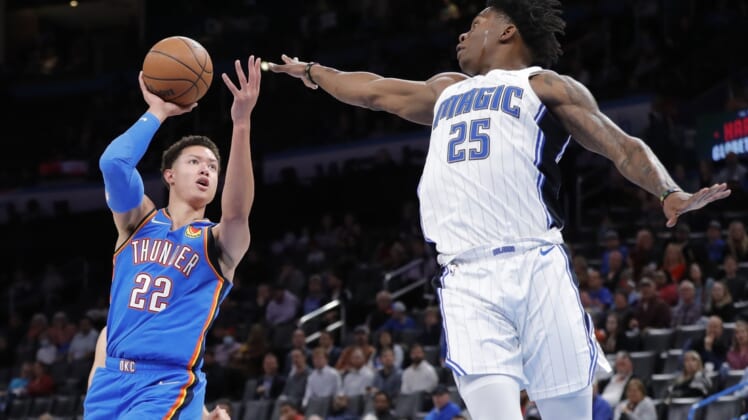 Theo Maledon scored 17 of his season-high 25 points in the fourth quarter to lead the Oklahoma City Thunder to a 118-102 home win over the Orlando Magic on Wednesday.

Oklahoma City (21-52) moved 1.5 games ahead of the Magic (20-54) in the overall standings.
The bottom three teams have the best odds of getting the top overall pick in this summer’s draft.

Tre Mann and Isaiah Roby added 21 points each for the Thunder.

Vit Krejci tied a career high with 12 points and set a personal best with 10 rebounds for his first career double-double. He helped Oklahoma City’s bench double up Orlando’s reserves, 52-26.

Chuma Okeke led the Magic with 19 points while Cole Anthony added 17. The loss snapped a two-game winning streak for Orlando.

The Thunder were without Shai Gilgeous-Alexander, who was out for the second time in three games — both against the Magic — with right-ankle soreness.

The Magic jumped ahead quickly in this one, leading by 11 less than four minutes into the game and by as many as 13 late in the first before going cold from the field.

Orlando went more than seven minutes without a field goal, missing 14 consecutive shots including its first 11 of the second quarter. The Thunder went on a 25-2 run during that span to take the lead for the first time.

Early in the second half, the Magic went on a 12-2 run as Oklahoma City missed seven consecutive shots.

Mo Bamba’s 3-pointer midway through the third quarter tied the game for the first time since early in the second.

But Aaron Wiggins quickly answered with a 3-pointer of his own to ignite an 18-8 Thunder run to put them ahead by 10 going into the fourth.