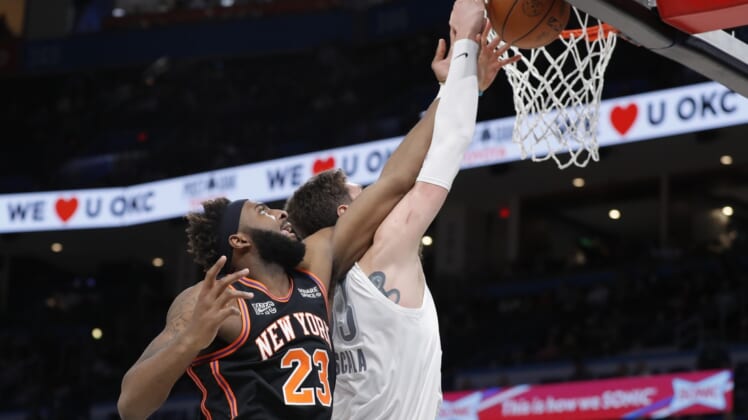 Shai Gilgeous-Alexander scored 23 points to lead the Oklahoma City Thunder to a 95-80 win over the visiting New York Knicks on Friday.

The Knicks, who were without three of their top playmakers, saw their three-game winning streak end. Derrick Rose missed his seventh consecutive game with an ankle injury, Julius Randle in in the NBA’s health and safety protocol and Kemba Walker was a late scratch due to left knee soreness.

New York struggled from long distance all night, shooting a season-low 19.5 percent (8 of 41) from behind the 3-point arc.

While the Knicks struggled from 3-point range, the Thunder had one of their best 3-point nights of the season, shooting 41.9 percent and tying a season high with 18 3-pointers.

The Thunder took control with a 19-7 run to start the second half after leading by two at the break.

Oklahoma City hit four 3-pointers during that stretch, including a pair from Isaiah Roby.

The Knicks cut the deficit to three early in the fourth before a 12-2 Thunder run extended the lead to double figures for good.

New York led by nine just more than three minutes into the game after the Thunder started 1 of 5 from the field with a pair of turnovers.

However, the Knicks scored just eight points over the final 8:43 of the period as Oklahoma City took the lead for the first time on Ty Jerome’s 3-pointer in the final minute of the quarter.

RJ Barrett led the Knicks with 26 points but was just 1 of 8 from beyond the arc. Immanuel Quickley, who scored 11, was the only other New York player in double figures.

Aaron Wiggins added 13 points for Oklahoma City while Jerome added 11 off the bench.