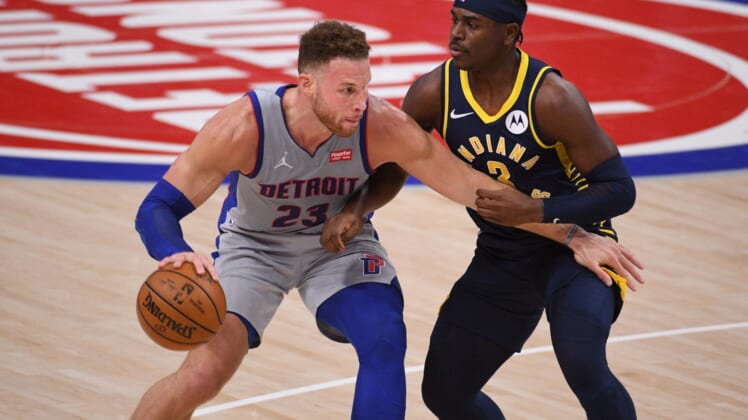 Blake Griffin and the Detroit Pistons are headed for a breakup, but finding a trade partner won’t be easy.

The 31-year-old said this week that he appreciates the Pistons “understanding” what he wants to accomplish in his career. So, it begs the question of why Oklahoma City is favored to be the next team Griffin plays for if he’s traded?

The Thunder are 11-17 and tied for 13th in the Western Conference. They’re four games out of the eighth spot in the playoff picture and 4.5 games ahead of Minnesota, which entered Thursday as the only team with a worse record in the West.

Still, the Thunder are listed as the +300 favorites by PointsBet to land Griffin in a trade.

Griffin did play at Oklahoma in college and the Thunder have the ability to match salaries in a potential trade, thanks to Al Horford’s $27.5 million salary.

Griffin is currently sitting out for the rebuilding Pistons, who own the Eastern Conference’s worst record at 8-20.

The next shortest odds to land Griffin belong to the Miami Heat (+350) and Boston Celtics (+450).

The Heat (11-17) have fallen to 11th in the Eastern Conference during their three-game losing streak, but are still only two games behind the Charlotte Hornets, New York Knicks and Toronto Raptors, who occupy the final three playoff spots.

The biggest hurdle for Miami — or any potential trade partner before the March 25 deadline — will be the remaining $36.6 million on Griffin’s contract this year and $39 million player option he holds for next season. In 20 games this season, Griffin is averaging a career-low 12.3 points along with 5.2 rebounds and 3.9 assists.

He would offer a boost to the Heat, who have struggled through injuries and COVID-19 protocols this season. It’s still unlikely that team president Pat Riley would saddle the roster with Griffin’s salary, but Miami could be a very viable destination should Detroit buy out the remaining two years of his contract.

Boston is in a similar situation, with Griffin’s contract more than the Celtics’ available trade exception of $28.5 million for Gordon Hayward. That makes it nearly impossible for Boston to acquire Griffin, but the Celtics could be an appealing destination following a buyout.

The Celtics (14-14) are another team in need of a boost as they sit in fifth place in the East.

The next lowest trade odds at PointsBet belong to the Hornets and Los Angeles Lakers at +600, followed by the Portland Trail Blazers at +700.

Portland is tied for fourth place in the Western Conference at 18-10 and could use a boost in the frontcourt. However, the Trail Blazers would have to offload several players to acquire Griffin and his contract, which would offset the benefit of his addition.