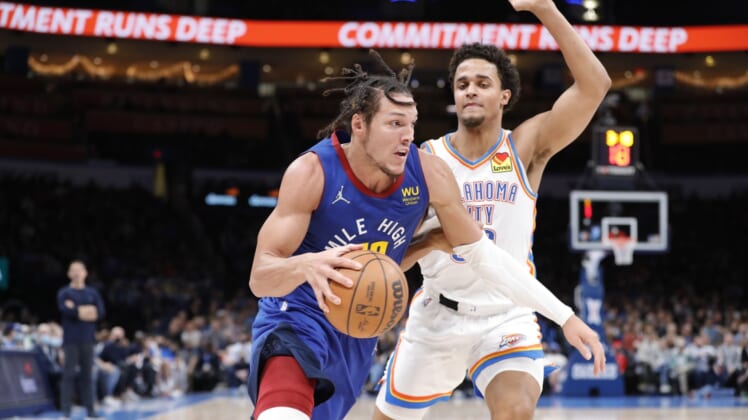 Shai Gilgeous-Alexander had 27 points, 12 assists and 11 rebounds to lead the host Oklahoma City Thunder to a 108-94 win over the Denver Nuggets on Wednesday.

The Thunder have won three consecutive games, while the Nuggets lost for just the second time in five games.

Oklahoma City led for much of the game and stretched its lead to 23 early in the fourth quarter before Denver made a push with its reserves.

The Nuggets ripped off a 20-6 run to cut the deficit to single digits with less than five minutes left, thanks to six points each from Austin Rivers and Vlatko Cancar.

Instead of re-inserting his starters, Denver coach Michael Malone elected to stick with his bench players, who briefly cut the deficit to eight with about three minutes to play before the Thunder closed strong.

Darius Bazley added 17 points and 11 rebounds off the bench for Oklahoma City, while Luguentz Dort had 15 points.

The Thunder’s 14-point margin of victory was their largest of the season.

Gilgeous-Alexander posted the second triple-double of his career and his first since January 2020 during his first season with Oklahoma City.

Gilgeous-Alexander scored or assisted on 51 of the Thunder’s points.

Denver shot 39.3 percent from the floor, its third-worst shooting night of the season. The Nuggets also missed 11 free throws, their most of the season.

The Thunder jumped ahead early, leading by 10 after one quarter thanks to Denver’s offensive struggles.

The Nuggets were just 7 of 26 from the floor and 2 of 10 on 3-pointers in the first quarter. Oklahoma City closed the quarter with a 19-4 run to take control.

Denver bounced back in the second quarter, but Gilgeous-Alexander hit all five of his shots inside the arc in the quarter to score 11 and give Oklahoma City a 60-52 lead heading into the break.

The Nuggets’ JaMychal Green returned after missing the previous three games with a right ankle sprain and left knee soreness.