Throwing cold water on Giannis Antetokounmpo to the Warriors rumors 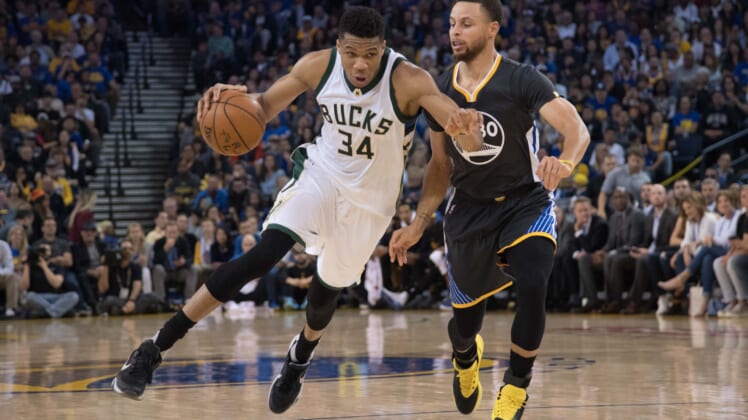 On the surface, Golden State chasing after one of the biggest names in the Association makes sense. Prior to the 2019-20 season being suspended, Steve Kerr’s squad boasted the worst record in the NBA. Stephen Curry had missed all but a handful of games.

Fellow three-time champion Klay Thompson had not suited up for a single game after suffering a torn ACL in last season’s NBA Finals.

Golden State must get younger and add more star power to compete with the likes of the Lakers and Clippers out west.

Looking further into this, the idea that Golden State could pull off a coup similar to the one that landed Kevin Durant in Northern California years back makes no real sense.

Anthony Slater of The Athletic threw some cold water in the Giannis to Golden State rumors in a column on Wednesday. He made several good points.

“It’s why, four years after the Durant coup, this Giannis to the Warriors noise remains at an incessant murmur, despite how truly impractical it is in reality,” Slater noted. “This is nothing like the Durant situation. Those dominoes lined up perfectly. These dominoes, linking Giannis and the aged, expensive Warriors, have lined up terribly.”

When Durant landed in Golden State four years ago, Curry, Thompson and Draymond Green were all entering their primes. Each one can now be considered to be in the back-end of their primes. It’s a much different situation than when Durant shockingly signed with the Warriors.

Needless to say, Golden State’s cap situation is borderline nightmarish. It handed Draymond Green a four-year, $99.7 million extension last August. After the sign-and-trade that brought D’Angelo Russell to the Warriors, they flipped him for high-priced former Minnesota Timberwolves wing Andre Wiggins. His average salary comes out to $32 million.

Meanwhile, two-time NBA MVP Stephen Curry is slated to count an average of $44 million against the cap over the next two seasons. This doesn’t even take into account the five-year, $189.9 million deal Klay Thompson signed with Golden State in free agency last July.

Any move for Giannis would require the Warriors clearing a ton of cap space and getting under the luxury tax. If they were to look to trade for him, assets heading to the Milwaukee Bucks would have to match up.

Would Milwaukee even be interested in a package surrounding Green, Wiggins and multiple first-round picks? I am not too sure. Rather, it would likely require Golden State breaking up the Splash Bros. duo of Curry and Thompson by moving the latter.

Sure the idea of the Greek Freak heading to San Francisco has to be appealing to both sides. But as Slater notes, it’s nothing more than a pipe dream at this point.