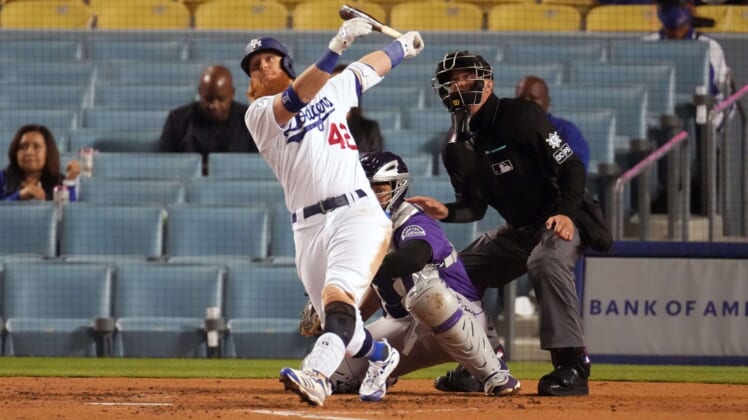 Turner had three hits as the Dodgers improved to 6-0 at home and won without Mookie Betts and Corey Seager in the starting lineup for rest. Both entered the game in the late innings.

Ryan McMahon and Garrett Hampson hit home runs for the Rockies, who saw their losing streak extend to six games. Colorado is winless in six tries on the road.

The Rockies took a 1-0 lead in the first inning on McMahon’s home run to right field off Dodgers starter Julio Urias. It was McMahon’s sixth of the season, tied for second most in the majors.

Hampson increased the Rockies’ lead to 2-0 with a home run to left field in the third inning, his first.

The Dodgers roared into the lead in their half of the third inning on a three-run home run from Turner, his fourth. Before this season, Turner had just three home runs before May 1 in his career.

The Rockies pulled back in front in the sixth inning. An RBI single from C.J. Cron tied it 3-3, and Yonathan Daza gave Colorado a 4-3 lead with another RBI single. A second run scored on Daza’s hit after a throwing error from Los Angeles replacement shortstop Chris Taylor.

The Dodgers started their seventh-inning rally with walks from Matt Beaty and Turner against Rockies right-hander Yency Almonte (0-1). Muncy then crushed a 2-0 pitch with two outs into the seats in right as Los Angeles went back on top 6-5. It was Muncy’s third of the season.

The Dodgers added a fourth run inning when Will Smith scored on a wild pitch by Carlos Estevez.

In his third start with the Rockies, left-hander Austin Gomber yielded three runs on six hits over six innings with two walks and seven strikeouts.