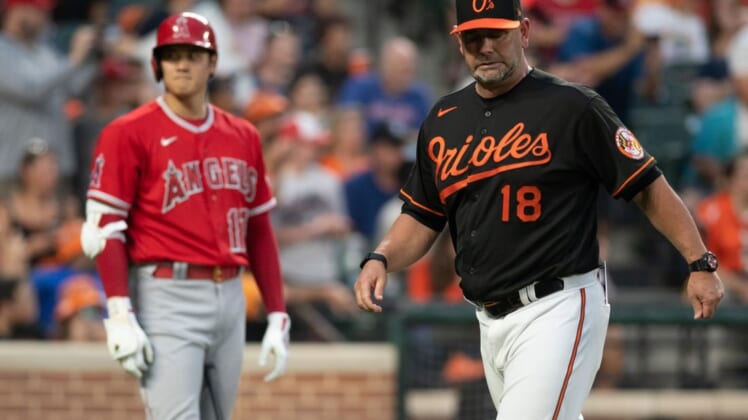 Trey Mancini capped a three-run ninth inning when he singled home Cedric Mullins with the winning run as the Baltimore Orioles rallied past the visiting Los Angeles Angels 5-4 for their sixth straight win.

Baltimore trailed 4-2 entering the bottom of the ninth, but Rougned Odor singled with two outs and scored on Adley Rutschman’s double off Raisel Iglesias (2-5).

Cedric Mullins then lined a single to center scoring Rutschman to tie it. Mullins went to second on Mike Trout’s throw home, to third on a wild pitch and scored when Mancini lined a shot to left.

It was Baltimore’s third walk-off win in five days and the Orioles have won six in a row for the first time since Aug. 7-13, 2020.

Dillon Tate (1-3) pitched one inning for the win.

Reid Detmers pitched six scoreless innings for the Angels. Detmers, who was sent to Triple-A Salt Lake following a pair of bad outings in mid-June, was recalled to make the start and turned in his best effort since his no-hitter against the Rays on May 10. He gave up two hits, walked one batter and struck out seven.

The Orioles pulled within 3-2 in the eighth when Mullins led off with a double against Ryan Tepera, went to third on a fly out, and scored on Ryan Mountcastle’s single.

Max Stassi walked leading off the third against Wells. One out later Jonathan Villar singled and Trout followed with his 24th homer run, a shot down the left-field line on a 1-0 pitch. The play was reviewed but the home run call was upheld and the Angels led 3-0.